On a Roll at the Borck Memorial

At the stroke play portion of the Borck Memorial Junior Tournament Monday, it was golfers with momentum coming into the tournament who led the way at the Country Club of New Canaan.

On the boys side, Kyle St. Pierre, runner-up in the Junior Amateur at Watertown Golf Club early in the month, shared the the low round, 73 (+3), with Connor Goode of Glastonbury Hills, another junior having a good summer, and Ashton Lewis of Trumbull, last year’s runner-up.

Jackson Roman of Shuttle Meadow Country Club, who last week won the AJGA’s Junior Golf Hub Championship presented by the John D. Mineck Foundation in Chicopee, Massachusetts, was two strokes back at 75. (Roman shot 64 in the first round of the 54-hole AJGA event, finishing five under for the wire-to-wire win.) Also two back of the leaders was Defending Champion, Charlie Duffy.

Sixteen boys who shot 80 or better will advance to match play tomorrow. Most shared the philosophy of Goode, who made a remarkable 16 pars in a round that included no birdies and a double bogey resulting from a ball out of bounds. “I was trying to hit fairways and the middle of greens. Fortunately I putted well and was able to two-putt all of them.”

St. Pierre also credited solid putting with his round, in which he overcame some “sloppy irons” on the front nine to shoot even par on the back. “My goal today was to try to get a top seed,” he said. Mission accomplished.

On the girls side, Defending Champion Sophia Sarrazin, who last week won the 55th Connecticut Women’s Amateur, shot 72 (-1), the only player in the field under par, despite a rather unkempt (for her) bogey/double-bogey finish, undoing some of the good work that four birdies and a 34 on the front had done. (Boys par is 70; girls par is 73).

Three behind Sarrazin was 2018 Champion and 2019 runner-up Mia Scarpati of Ridgewood Country Club, who always seems to be on a roll. She made two birdies and an eagle on the front, another birdie on the back to shoot 35-40 and secure the second seed.

Eight girls will compete at match play Tuesday. They include Molly Mitchell, younger sister of Meghan Mitchell, the 2019 Women’s Amateur Champion, who caddied for her sister today.

Sarrazin was shaking her head at the end of her round. “I totally messed up. My distance into the green at the last hole was 72, but somehow I heard 54. I came up way short and then tried to hit the perfect shot and oh well.”

“That was a perfect 54-yard shot,” quipped Scarpati. The two friends and rivals play together often and today was, said Scarpati, “another good friendly match.” One got the impression that the two wouldn’t be surprised to be playing a friendly match in Wednesday’s final too.

Sarrazin didn’t blame her caddie for the miscue. On her bag was Dancing with the Stars’ Tony Dovolani, who besides being an expert ballroom dancer and instructor, carries a 6.2 handicap at Patterson Club, where Sarrazin and Dovolani’s daughter, Luana, play. Tony and Robert Sarrazin, not allowed to caddie for their own daughters, switched bags. (Photo) 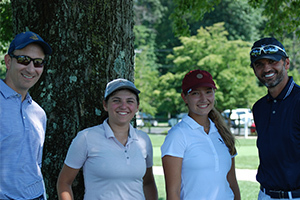 It was Luana’s first tournament and she and other young players in the Borck field reminded us that some of the most inspiring play comes from juniors taking on the pressure of competition for the first time. On Monday they included Mike Jones, who might weigh less than his golf bag. Jones shot 120, but was still grinding over his final putt on the last hole, his Mom Gina on the sideline watching. “I had some good shots, but I got into some trouble, too,” said Mike. “But it was fun.”  Another was 12-year-old Isabella Hassan of Rolling Hills Country Club who shot 115 in her first tournament—of any kind. “We got that email that there might be spots open, so she figured what the heck,” said dad Anthony. “She had a few tough holes out there but overall I’ll bet she’s happy with the way it went.” She was. “Veteran” 12-year-old Robby Rosati of Mill River Country Club, who’s been competing since he was 6, shot 85.

Each year, the Borck Memorial Tournament is held in memory of Jay Borck, a young golfer who died of a cerebral hemorrhage in 1968 at the age of sixteen. He passed away one week after winning the Brooklawn Junior Championship. Beginning this year, the CSGA is administering the tournament.

“We consider the Borck to be a major event, on the same level as our Connecticut Junior,” CSGA Executive Director Mike Moraghan said. “It’s important for kids interested in golf to play in a great tournament atmosphere, and it’s great for kids to get excited about tournament golf.”

Paul Hiller, a longtime member of the tournament’s executive committee who was on hand Monday, said he considered the CSGA the logical choice to take on the event.