It's Roman and Scarpati In the Borck

Scarpati adjusted to the tricky New Canaan greens and made a handful of clutch putts that kept Sarrazin at bay.

New Canaan (July 29, 2020) Mia Scarpati is officially out from under the radar.

And Jackson Roman is officially on fire.

They are your 2020 Borck Junior Tournament champions, both with breakthrough stories to tell.

For Scarpati, 16, who sometimes gets lost in discussions of Connecticut’s great young junior players, it was payback of sorts. She defeated Defending Champion and 2020 Connecticut Women’s Amateur Champion, Sophia Sarrazin, 15, her friend and frequent playing companion, 3 and 2, with a putting performance that left Sarrazin, who beat her in the final last year, shaking her head. It was Scarpati’s third straight Borck final—she won it in 2018—and she’s is now part of a rare group in the event’s 51-year-history who have their name on the Jay Borck trophy twice, a group that includes J.J. Henry. Scarpati attends Coate Rosemary Hall, a great school with a less celebrated golf team than, say, the Hamden Hall team with Roman, Sarrazin and 2019 Junior Amateur Champion Ben James.

For Roman, 17, it was the conclusion of a dream month, one that recalled Bubba Watson’s words at the Masters when he said, “I never got this far in my dreams.” The Borck win was Roman’s third in July and he didn’t start until mid-month. He won the AJGA’s Junior Golf Hub Championship at Chicopee Country Club, July 14-17, shooting 64 in the first round. On July 22-23, he won the 36-hole US Challenge Cup Championship at Agawam Hunt in East Providence, with rounds of 67 and 69, and this week he plowed through a strong Borck field, his opponents including Ben Loomis on his home Country Club of New Canaan turf, and finalist Connor Goode of Glastonbury Hills Country Club, who played as well as a person can play and not win the championship, with victories of 4 and 3, 3 and 2, 5 and 4, leading to Wednesday’s final. 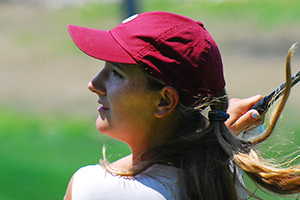 “I think the difference between last year and this year is mainly mental preparation,” said Scarpati referring to last year’s final when she led Sarrazin (photo) by three at one point only to fall on the final hole. “I’ve worked hard on playing confidently. I think last year I got careful. I didn’t do that today.”

Coach and (today) caddie Bobby Brown of Tashua Knolls agreed. “It’s been something we’ve worked at,” said a proud Brown after the round. “Playing aggressively, not playing defensively. Working a lot on wedges, too.”

And putting, because Scarpati’s confidence came through again and again today in par and birdie-saving putts of 5, 6 and 8 feet that gave her a lead early and allowed her to maintain that lead in the middle of the round when Sarrazin challenged. Getting the feel of the greens was something that Scarpati talked about after yesterday’s quarterfinal. After beating Molly Mitchell of New Canaan Wednesday morning, when she shot two under par on the front nine to take a lopsided lead, she two-putted from 35 feet for birdie on the first hole against Sarrazin, fist-pumping after holing a five-foot second putt to win the hole. Two up after eight, she made similar putts at 9 (for birdie), 10 (for par) and 12 (for par) at a point when the match might have turned as it did in 2019.

“She putted lights out,” said Sarrazin.  “I don’t think she missed a single putt inside eight feet and made at least one outside of that. I didn’t make those. I was close, but not making them. When you hit the same number of greens and don’t make those putts, you’re not going to win.”

After sustaining a one-up lead through 13, Scarpati hit it close at the par-3 14th and won when Sarrazin three-putted. She then hit her approach on the par-4 15th to a foot, and was dormie. The pair then tied the 16th with pars and the match was over.

It was the second Bobby Brown student Sarrazin had faced Wednesday. She reached the finals by defeating Tashua Knolls’ feisty Jensie Nicholas, another student in Brown’s Competitive Golf Acadamy, 4 and 2. 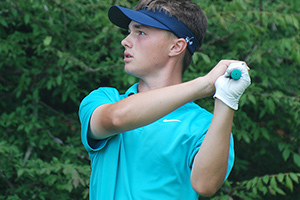 For Roman (second photo) it was a similar victory of attrition. Like Scarpati, he was never down in the match and took a two-hole lead into the ninth. On the back nine, he stepped things up, transforming a one-up lead after 14 holes into victory with birdies at 15 and 17, the last one “a few inches,” he said.

Roman also cited work on the mental side as a reason for his recent breakthrough. “After the Junior Amateur, where my attitude wasn’t great, I decided I needed to focus on that.” (Roman lost in the quarterfinals). Roman said he’s been mentored recently by four-time Connecticut Open champion Kyle Gallo, not on his swing “but getting the ball in the hole.” He’s really helped me with just knowing how to play a round and play a tournament,” said an appreciative Roman. “He’s helped me to not think of things like I’m seven under par, and instead focusing on the shot in front of me.”

Like Scarpati, Roman solved the tricky New Canaan greens, which gave all of the players fits at times. Against Goode, Roman made two birdies on each side, at the fifth, the eighth, the 15th and 17th, and surprisingly, none were on par 5s. Had he played the 18th and made par, he would have shot 69 (-1). 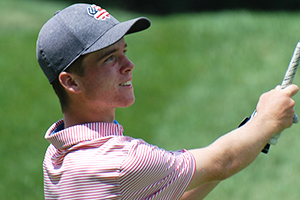 Both Roman and Goode (the No. 1 seed, third photo) had a relatively easy time of it in the morning. Roman defeated Will Whittaker of the Club at River Oaks, 6 and 4, and Goode defeated 2018 Western Mass Junior Open champ Luke Karpiej, who started slowly, 5 and 3.

When it was over, the champions took a call from the PGA Tour’s J.J. Henry, who congratulated them and urged them to keep working. Host pro Adam Rainaud, himself the 2016 Connecticut Open Champion, also urged them to work “hard and smart” to fulfill their dreams. “Tom Watson said he would do anything to make his dream happen,” said Rainaud. “You never know,” said Henry to Scarpati. “Thirty years from now you may be calling the champions from the LPGA Tour.”

Executive Director Mike Moraghan called the Borck tournament, named after Brooklawn Junior Champion Jay Borck, who died shortly after winning that event, one of the premier junior championships, and said that the CSGA would continue the tradition of inviting not only premier junior players like Wednesday’s champions but young competitors getting their first taste of tournament golf, like this week’s 12-year-olds, Mike Jones and Isabella Hassan, who shot well over 100 but loved their competitive experiences.