Well, that worked out!

At three-under through his first 28 holes, Saptak Talwar is the overnight leader. Play resumes at 8:30am on Wednesday.

Danbury (August 4, 2020) Jason Thresher’s early start paid off Tuesday as remnants of Hurricane Isiais rolled into Danbury, suspending play at the 86th Connecticut Open presented by Reby Advisors just as Thresher completed his second round, a two-under 69 that moved him to -1 for the tournament, in second place alone, and leader in the clubhouse.

After the 12:30 stoppage due to fierce, gusting winds and horizontal rainfall, play will not resume until 8:30 Wednesday morning when players will resume their rounds or, in the case of thirteen groups, begin them altogether. Meanwhile Superintendent Dave Kerr and his crew will clear large amounts of limb and leaf debris wrought by the storm.

Executive Director Mike Moraghan and Director of Competitions Ryan Hoffman said that after players complete the second round, probably by about 3:00 p.m., the usual cut identifying the top 40 players and ties will be made. Those players will tee off shortly afterward and complete as much of the third round as possible. The final round will be completed Thursday morning.

Thresher, the defending New England Open Champion, finished Monday’s round at about 5:30 p.m., drove the hour-and-a-half back to West Suffield, and then returned for an 8:00 a.m. tee time on Tuesday.

“Big turnaround when I got home last night and when I came here this morning. I’m exhausted right now,” said Thresher, who said he did not know that he had moved into second until he’d finished. “But the timing worked out. I’m going to enjoy the afternoon resting and probably will until the afternoon tomorrow.” 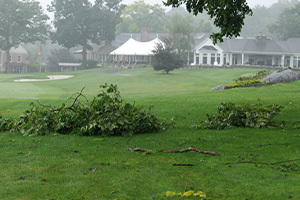 Thresher made three birdies and a single bogey in the low round of the 21 players who completed the second round. Only he and Talwar have broken 70 so far on the 6750-yard, par 71 Ridgewood, whose challenging greens and tree-lined fairways have kept the best players in the state for the most part in check.

Thresher’s time allowed him to dodge the worst of the winds.

“The wind started to pick up at 11 a bit but it wasn’t really factor until 15 or 16,” said Thresher, who nonetheless birdied the long, par-4 16th, among the hardest holes at Ridgewood. When play was suspended the field  was given the option to complete the hole they were on, and Thresher completed the 18th.  “I was very thankful, but still felt a little rushed finishing the hole. I didn’t want to blow it.”

Thresher, who once said he’d gi 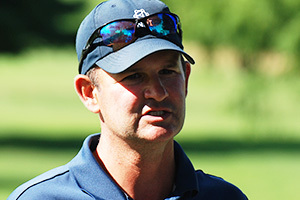 ve up one of his three consecutive Massachusetts Open victories (2016-2018) for a win in his home-state Open is not new to contending for it.  He was close in 2017, when as part of a three-man playoff he lost to Jeff Evanier, and in 2019, he finished T4 to Rasmey Kong.

For Gallo (photo), who won this championship in 1998, 2000, 2004 and 2010, the only player to win four times, there was nonetheless a similar feeling of gratitude for a tee time that dodged a storm. "We didn't get it bad at all. It was fine except the last three holes when the wind started to pick up a little bit. We really got away with the luck of the draw.” Gallo said before the championship that he doesn’t play much competitive golf any longer and is glad to be occupied with family life. He and wife Megan Chasse have a three-year-old son with another child on the way.

Gallo wasn’t playing Monday and Tuesday like someone who has given up competitive golf. Of the others at even par on a leader board congested near the top, Blake Morris of the Country Club of Waterbury has completed 16 holes, Peter Ballo of Silvermine Golf Club 14 holes, and amateur Mark Gertsen, of the Country Club of New Canaan has yet to tee off.