Despite a final-round 67 by Ridgefield's Rick Hayes, Ben Day ground out the win. 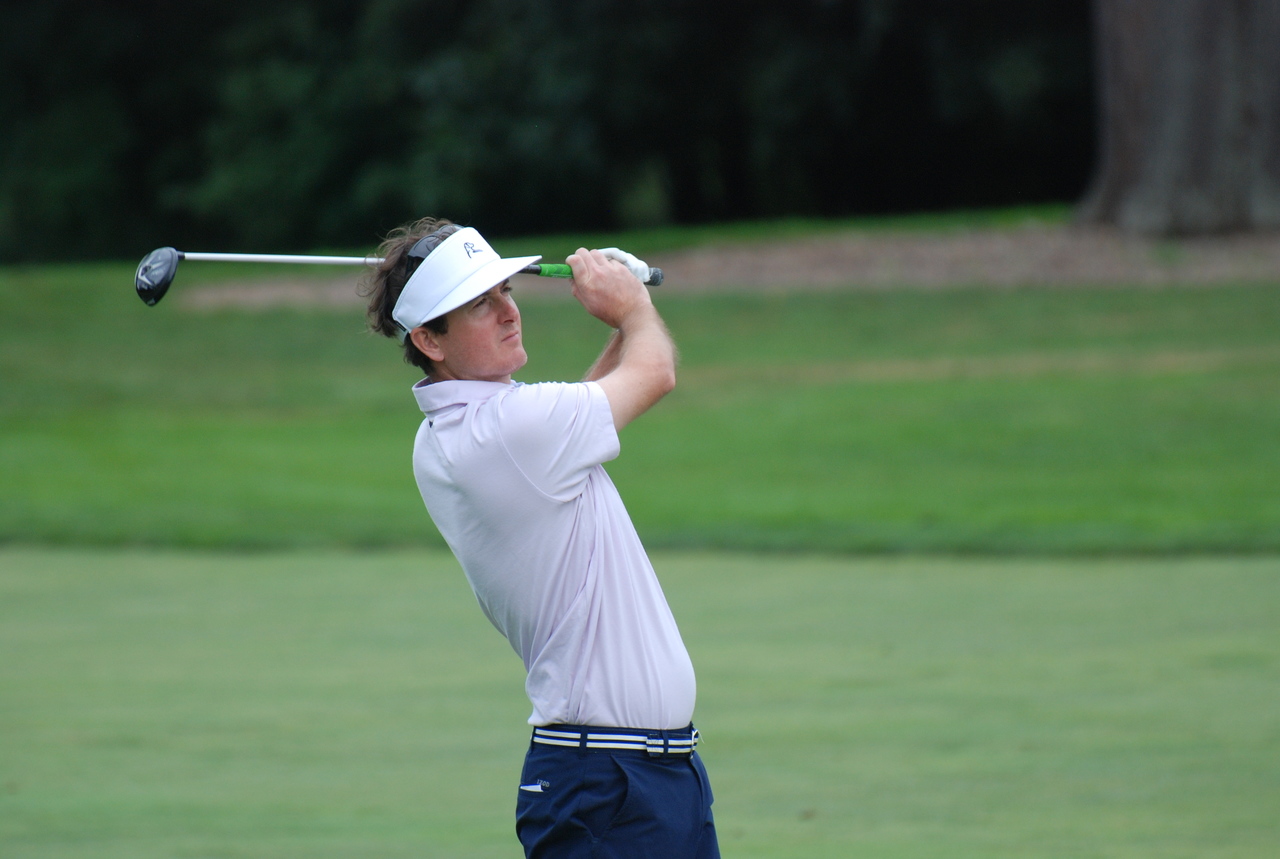 When Silver Spring’s Rick Hayes, playing with Day in the final group, made up 5 shots in 17 holes, hit a brilliant second-shot hybrid just over Shuttle Meadow Country Club's 18th green, nearly hitting the flagstick, chipped to 5 feet and seemed certain to make the birdie that would give him 66 and take him to -5, finally securing the lead, Day removed his pink New Haven cap, ready to congratulate Hayes on a stunning come-from-behind victory.

“I thought it was over,” said Day.  “I thought he would make that. But as I say that, it’s kind of a cool feeling to go from me thinking that I’d lost, I mean Rick played a great round, and to come back and be sitting here the winner is a cool feeling.”

For his part, Hayes (photo) hit the 5-footer just as he’d planned. It simply did not fall. He finished with 67, one of only two rounds in the 60s in round three, and faced the 18th again in a sudden-death playoff. In the playoff Day hit one of his longest drives of the day, leaving him with a short iron from the fairway into the par 5. Hayes, uncharacteristically, pushed his drive right into a stand of trees, had to punch out to a spot slightly farther from the green on the fairway than Day, and missed on the short side with a 5-iron, leading to an 8-foot putt for bogey that he never had to make.

But it was the putt in regulation that stayed with both of them.

“I hit a pretty good chip, to be honest. It just came out hotter than I thought. It rolled past the hole and I watched it curl a little bit to the left which means my putt coming back would curl a little right,” said Hayes. “But it was just dead straight. If I went back there right now, I’d hit it the same way. It’s just one of those things. It’s golf.”

Another one of “those things” is playing with the lead. After shooting a second straight 68 and watching Hayes, his day-one co-leader, shoot 74, Day was -6, Hayes was even par, and Day had a 5-stroke lead over Connecticut Amateur Champion Rick Dowling, who was at -1.

“It is hard to play with the lead. I mean someone else may feel differently, but I prefer to play from behind. This afternoon everything was just a little bit off.” That said, Day began the final round with a birdie on the first hole to get to -7, but the wheels were loosening. He blocked his drive into the trees on the par-4 second and had to make a remarkable up and in for bogey. On the fourth, Shuttle’s signature disaster hole with a stream meandering along the fairway, across the fairway and behind the green, he doubled. A birdie at the par-3 sixth, he said, calmed him, and then another at the par-5 seventh, temporarily settled things down. But from then, it was a struggle.

It wasn’t, Day said, that Hayes was coming on. “I mean I didn’t even know Rick was coming on. I was just so into settling down. I just wasn’t completely settled from the second hole when I hit that blocked shot. Nerves were part of the whole round in retrospect. I was missing just a little bit.  You know, something changes when you have the lead and you know it’s the last round. You tell yourself you aren’t but you are, things change. You fight the outcome demons. You’re fighting them off because they’re there.”

Day played conservatively in the afternoon, keeping his approaches below the hole, but sometimes farther than he’d hoped. His lag putting saved him. Hayes, on the other hand, told himself to play aggressively and that began to pay dividends on the back. He birdied the par-3 11th. He hit wedge to about 12 feet at 14 and made it, while Day made a long two-putt. On 15, the 230-yard par-3, Hayes hit hybrid instead of a safer 4-iron, to four feet and made that putt for birdie. Suddenly Day’s lead was one. They tied the short par-4 16th with pars, and then Day flinched. Driving the ball far right on 17, punching 10 yards short of the green, and failing to get up and down. With one to play they were tied.

Hayes, despite his disappointment, was magnanimous in his praise for Day. “He is such a worthy champion,” said Hayes. “And he is the best putter of anyone I know and has to be the best putter playing tournaments in Connecticut. Every putt he hits looks like it’s going in.” When a spectator told Hayes early in the day that she had come to watch and learn, he said, “Watch him putt. Then you’ll learn something.”

The morning of day two began with Day and Hayes three under and Steve Wagner two back. They were the only three players in red figures. Both Day and Hayes had made five birdies in round one, against two bogeys each, and—important—no “others” on a course with so many opportunities for disaster that it be called Other Meadow.  Patches of fescue, the meandering brook on the front side, hole locations that would not tolerate short-side recoveries, and greens that approached 12 on the Stimpmeter and generated an endless string of comeback six footers make Shuttle Meadow as mean as a monster.  For a 6516-yard “old style” golf course, Shuttle was holding up incredibly well.

Round two on Tuesday morning reminded you of that Twilight Zone episode when the world is frozen in place and only the protagonist can move around normally. That was Day. Hayes shot three over, making four bogeys on his opening nine, the back, for 74. Wagner, whose two birdies on his second nine suggested he might recover from a two-over 36 on his first nine (the back) made a 10 on his penultimate hole, the par-5 8th, to remove himself from contention for good.

The one exception was Player of the Year leader Dowling, who, after an even-par first nine (holes 10-18) made three birdies on the front, only to finish with a bogey at the short par-3 ninth. His two-under 69 was one of only three scores under par in round two—along with Day’s and a one-under 70 by Mike Carey of East Hartford Golf Club.

It certainly wasn’t the weather that kept the field in place. The morning was almost windless, and low humidity made it comfortable, even cool early on. But only Day seemed to notice. He made three birdies against two bogeys after teeing off on the tenth—and then made two more on the first nine, to lengthen his lead to five.

After lunch, it a different story.

Dowling played well on Tuesday, shooting 69 in the morning, and, despite a double bogey late in the round due to a miss-hit wedge, shot 74 to finish third alone.

It seemed fitting, finally, that the Mid-Am, sponsored by KOTA Solutions, and open to amateurs 25 and over, ended with Day surrounded by his young family—wife Leeza, baby John 15 months, and Margaret 3-and-a-half, and Hayes going home to his one-month old daughter Quinn. The Mid-Am life, the champion acknowledged, is far from the professional life he once tried, and far from the college game, where practice time and training is plentiful. Neither Hayes, the 2019 Russell C. Palmer Cup champion, or Day, the 2015 Palmer Cup champion who plays now out of the Country Club of Waterbury, had been able to play a practice round.

“It’s great to have my family here,” said Day, 38, who had Mom and Dad and his brothers there too.  “You can’t do it without the permission of your family. To play at the level I want to play I need that, and Leeza is really good about it and great to come out with the kids. But I’ll be at work tomorrow. I have a 7:00 meeting. It’s a good balance.”

Day, will be, however planning for the U.S. Mid-Amateur September 14-19 near Denver. He and his brother, Dan, now living in South Carolina, have both qualified.

For the Days, golf is a family affair.