With friend TJ Fitzgerald on the bag, Conroy overcame a 4-shot deficit on the final nine to win his second Mid-Am in three years.

After a long-iron tee shot on the second playoff hole, Conroy hit lob wedge from 93 yards to two feet.

“It was the perfect lob wedge, I didn’t have to kill it, but it was a nice full swing,” said Conroy, who confessed, nonetheless, that he felt a little nervous over the two-footer. “I know how hard it is to close.” Paladino, who hit his second from the deep rough to 25 feet could not convert. 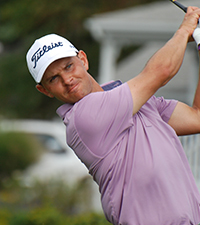 To catch Paladino (photo) on the final nine holes, Conroy had to shoot the low round of the championship, 66 (-4), while Paladino shot 70, level par, after a second consecutive 68 in the morning. Both were three under par for the day when Paladino began the difficult final eight holes of the course, more open but much longer than the first ten. Standing on the 11th tee, Paladino was -7 and four shots of ahead of Conroy, who had already played the 11th and bogeyed to go to -3. The four-stroke difference was where they had begun the final round. But hree consecutive bogeys by Paladino at the long par-3 11th, the par-4 12th and the downhill par-3 13th and a 20-foot Conroy birdie on the par-5 14th put them both at -4. Each had makeable chances at 16, 17 and 18, but could not get birdies to drop.

Paladino’s best chance came at the final hole. After a perfect drive, he hit pitching wedge to just six feet from the back left pin. His putt lipped out. “I played it on the right edge, and needed a little higher line,” said the disappointed Paladino, who in 2020 has finished runner-up in the Amateur and T2 at the Palmer Cup. He was seeking to become the first player in Connecticut history to win all of the men's major championships: the Open, the Amateur, the Public Links, the Palmer Cup and, in his first attempt, the Mid-Am.

Long before Paladino's lip-out on 18 in regulation, it had become a two-man championship. Jeffrey Riley of Black Hall Club shot 67 in the morning and began the final round at one under, but slipped to 73 and finished third alone at 212 (+2). Austin Cilley of the Lakes of Isles Golf Club finished a shot back of Riley at 213, and Josh Cameron of Shennecossett Golf Club finished fourth at 216.

Only one other player broke par in the final round, Justin Beal of Fox Hopyard Golf Club, who shot 69 to finish sixth.

What kept scores down in the morning was a 20-mile-an-hour wind that pushed balls long on 18, held them up on the long par-3 11th, and created cross currents in the heart of the golf course, the testing Nos. 14, 15 and 16.

Conroy said he was prepared for more wind in the afternoon, but found the conditions much more benign. “I thought it was only going to get worse and if it had, four under would not be possible,” said Conroy.  “But it eased and definitely made it more scoreable.”

What also made for better scoring was a putting change Conroy devised between rounds. “I made an adjustment to my head position that got me hitting the ball more on my line.” He said his full swing thoughts were “keep my head steady and pause at the top.” His tempo in the final round was just as steady. He and friend T.J. Fitzgerald, who knows the course well and caddied for Cnroy this week, seemed to have figured out Madison's tricky greens.

That helped the 2018 Player of the Year get off to a hot start. He birdied the 3rd, 5th and 7th holes, giving him a front-nine 32, despite not making birdie at the short par-5 6th. But Paladino made three birdies of his own, against a single bogey, to finish the nine at 33, three ahead. Both birdied the short 10th with threes. After each bogeyed the 11th, it came down to the final seven holes. Paladino recovered from an errant drive on 12 and got it on the green, but in a difficult spot, missing a 5-footer for par. On 13, “an okay shot” left him next to the green but an indifferent chip prevented a conversion. “That hurt,” said Paladino after. “I didn’t really know where things stood at that point, and then I looked at some point on 14 or 15 and I saw that Benny was obviously playing a great round. I had my chances coming in. I had a good look on 16 and obviously the one at 18 in regulation. I just didn’t play a high enough line.”

Conroy knows from lost leads in the Mid-amateur, having lost one himself in 2017 before an unsuccessful playoff. His comeback today, four shots, was one more than the lead he lost then.

The players were in universal praise of Madison, which was at 6500 yards was in perfect condition and, given Conroy’s 66 and Rile’s 67 Tuesday, “scoreable.”  But as defending champion Ben Day, who finished T9, predicted before the event, “it may play harder than people expect.”

As his father Jay congratulated him for his patience and gutsy comeback—"I'm so proud"—Ben Conroy accepted the trophy and headed home to see his own son, just a year old, before bedtime.

“It was a great championship and we are very appreciative of the warm reception we received from the Madison membership, their many volunteers, and the club staff,” said CSGA Executive Director Mike Moraghan. “It was a great venue for a very strong field of Connecticut mid-amateurs with two exceptional players in Ben and Cody leading the way.”