Bloomfield (August 7). Peter Tomlinson did what every competitor dreams of doing. He made his first win a major.

Tomlinson, a mostly self-taught player from Seymour who had not won at the junior level or been good enough, he says, to play in college, and who had never won a CSGA event, shot 66 Wednesday to overtake first-round leader Gabe Van Ness and capture the 2019 Connecticut Public Links at Wintonbury Hills Golf Course.

Tomlinson’s total of 135 was two better than Van Ness, who followed his opening-round 64 with 73, and Amateur Champion Rick Dowling, who shot 69 to go with 68 Tuesday. Defending Champion John Abbott of Timberlin and Jamie Sheltman of Alling Memorial—T3 last year—finished shared fourth.

Along with Wintonbury’s Seth Egnasko, they were all among only six players that bettered par at Wintonbury, which played considerably more difficult Wednesday with tees back, pins tucked and greens faster.

The winner’s four-under 66 was the best round of the day by three. He made five birdies, three on the front and two on the back, and hit every green but one, the par-5 4th, where he backed a wedge off the green and bogeyed. 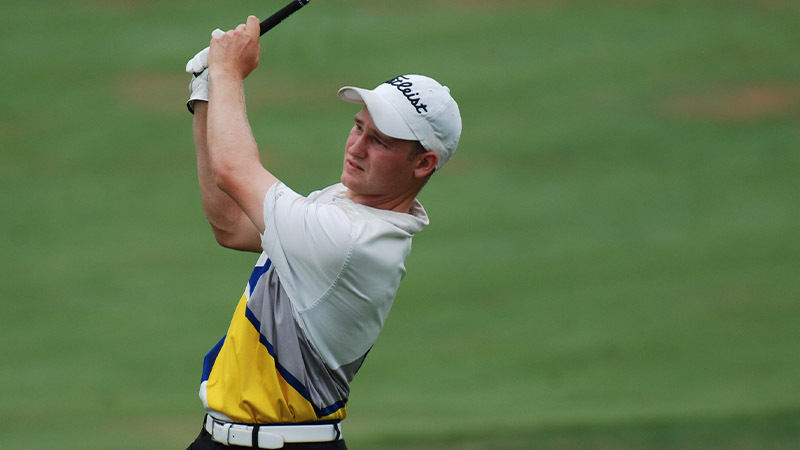 “He was a machine,” said Abbott, who played with Tomlinson. “He never wavered.”

Tomlinson, who works as an amateur assistant to Kevin Mahaffy at Pequabuck Golf Club in Plymouth, said he asked where he stood on the 11th tee and learned that at -3 for the tournament he was two back and “had to make a couple of birdies coming in. From that point on, the less I knew the better. When I made the birdies at 14 and 16, I knew I had to be close.”

Tomlinson figured that staying ahead of the players in his group, Abbott and Egnasko, was plenty.  “I was trying not to get ahead of myself. I knew what the guys in my group were doing, and that was enough.” Besides, Abbott, who shot his second consecutive 69, Egnasko, Connecticut Amateur semi-finalist, got to -4 before bogeying the 250-yard par-3 7th and tripling the par-4 11th. He finished sixth.

Van Ness, 22, admitted to being a bit nervous on the front, three-putting twice. Nevertheless, he managed an even-par 35 and still led by 3 as he completed nine and Tomlinson, two holes ahead, teed off on 12 at three under—three back of the leader. But the lefty bogeyed 10 and 11 and found himself tied at -4 with Dowling, who had birdied 11. Tomlinson, playing the uphill par-5 13th, was now only one back. His chance of tying the lead fell short after a mediocre wedge there, but he has learned from watching players like young friend Ben James, not to get too exercised over any one shot. “I was okay. I made par, and I figured I didn’t lose any ground,” he said. With five holes left, he trailed Dowling by a shot and Van Ness, who had birdied the 168-yard 12 to get back to -5, by two.

From that point on, faced with Wintonbury’s malevolent Final Five, Tomlinson outplayed the field. With a choked-down 8-iron, he  birdied the difficult, 440-yard par-4 14th (as he had Tuesday), parred the 427-yard 15th, hit a choked-down pitching wedge to 2 feet on the 16th for birdie, where he finally took the lead, and then parred the 219-yard 17th—a hole that gave the field fits on both days. (Of the five top finishers, only Tomlinson and Abbott parred 17 Wednesday).  A 9-iron to 25 feet under the hole on 18 and he was in ahead of yesterday’s leaders at -4 for the day, -5 for the tournament.

Meanwhile Van Ness, who will soon be a 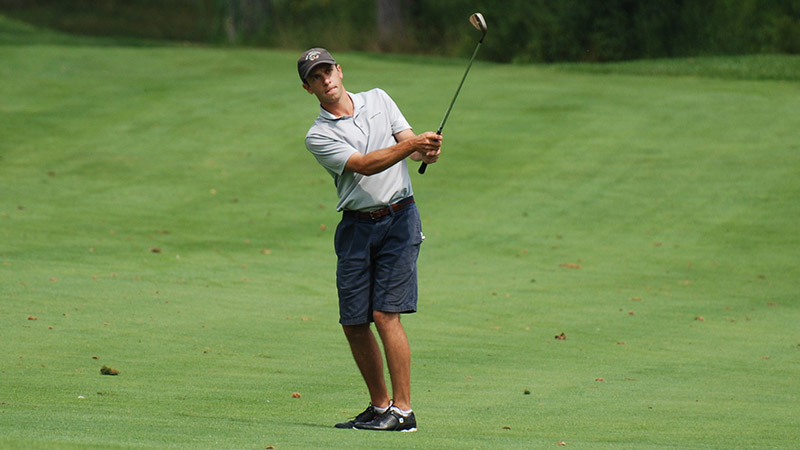 CPA with PricewaterhouseCoopers, and wanted in the worst way to win his first CSGA major before heading off to work, found the numbers working against him. One over for the day as he faced those last five, he parred 14, but bogeyed 15 after a blocked tee shot and a three-putt from the front of the green.  His approach on 16, to a difficult, left pin, bounced right away from the flag and he was unable to convert his birdie. On 17, he missed another short putt for par, and with Tomlinson already in at -5, would have needed an eagle at 18 to tie. “I wasn’t as solid as I was yesterday,” he said. “But the main thing was I didn’t have a feel for the speed of the greens.” Short putts, he and dad and caddie Stephen, agreed, were his undoing.

Dowling (second photo), who also missed short putts for birdies at 6 and 13, missed another for par at 17, dropping him to -3 for the tournament. He too, would have needed eagle on the final hole to tie. He parred. “I played well,” said Dowling, who has played exceptionally well this year. “I missed three putts that would have made a difference. My swing’s in good shape. I’ll spend a little time on my putting.”

The champion said he was gratified that he’d played ahead of Tuesday’s leaders. “It was actually good to be coming from behind,” admitted Tomlinson, 24, who is not sure yet whether he wants to pursue a career as a club professional. “I really didn’t feel any pressure. I tried to concentrate on the shot in front of me.” It was a lesson he’d learned the hard way after a strong first round at the 2018 Public Links at Timberlin. “I got out of my rhythm and away from usual game,” he said. “I was talking more than usual, it just wasn’t the same. Today I tried not to get ahead of myself.”

Wednesday was a day when one shot at a time paid big dividends because Wintonbury, a 2005 Pete Dye design, showed its teeth. Longer yardages on the par 3s—they played 163, 270, 185, 149 and 219—especially, resulted in higher scores across the field. Tougher hole placements and green speeds approaching 11 on the Stimpmeter, by Head Professional Ciaran Carr's estimate, saw long putts and chips roll out farther and made short ones dicier. 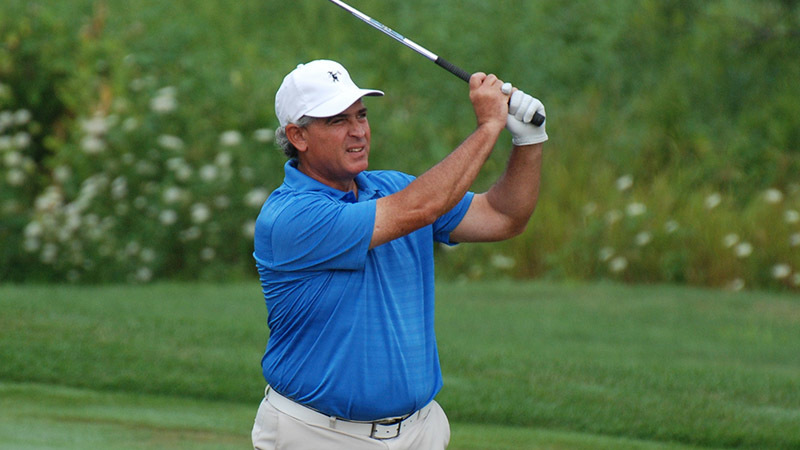 There was one player who mastered one of those threes.  Mike Fitzpatrick of H. Smith Richardson (last photo) aced the par-3 3rd hole, at 163 yards, with a 6 iron. He finished 12th at plus 2.

Only four players bettered par on Wednesday and six of the 30 who qualified for today’s second round shot in the 80s.

It was a grind, and at the end of that grind, victory was all the sweeter. “This really means a lot,” said Tomlinson. “It is my first CSGA win, my first state win. I’ve won the club championship at Orange Hills, but nothing like this. I’m really looking to build on this.”