Despite his second sub-par round, Chris Ayers, with 68-71, could not quite match the champion's six under par.

West Simsbury (August 11, 2020) Connor Roche finished the job today and looked unflappable doing it. That, it turns out, was camouflage.

“I felt pressure from the first tee on,” said Roche, who indeed bogeyed the first hole at Simsbury Farms Golf Course, but went on to win the 35th Connecticut Public Links Championship presented by GOLFTEC by one shot. “There were a few putts where I was shaking. But I just tried to stroke it along my line.”

The 22-year-old, who is heading for Air Force training in November, acknowledged that some of the pressure was self-inflicted. This would be, after all, the biggest victory of his golfing life on the course where he learned the game, played high school competition, and even trained for his job as a performance coach.

“It is very special to win here,” he said to a group of fellow competitors and family members, including mom Pam, when it was over. “I grew up here. I could walk to the fourth hole from my house.”  Roche birdied that hole today, and the next one, on the way to his first CSGA victory.

Roche did it according to plan. After shooting three-under 69 Monday, he predicted that if he shot another 69, he could win. He was a shot back then. “I think six under par will do it,” he said.

Chris Ayers, the Old Dominion star, who won’t be playing college golf in the fall due to COVID restrictions at the university, but who will continue virtual learning, shot 71 (-1) to go with yesterday’s 68, finishing at -5. He missed a 12-footer on the final hole that curled left and sealed for Roche what had the feel of fate.

But it was less fate than fortune on two holes early on the back nine that turned out to be key: the par-4 11th and the par-5 12th. At that point Roche was five under, Ayers four. As Ayers played the 11th and hit a huge drive to 80 yards, Roche, a hole ahead, hit a smother hook off the tee, thrashing through the trees along the left side, and looking dire enough for him to hit a provisional. “That’s gone,” said one rules official on the hole. But Roche found his ball in the rough and Ayers lost his footing while hitting his wedge shot and eventually made bogey at 11. Suddenly Roche’s lead was not only safe, but had grown to two. When Ayers birdied the par-5 12th, he narrowed the lead to one again, but could never overtake the champion, who birdied the par-5 14th and the short par-4 15th to reach seven under. Even when Roche botched the short par-4 17th, where he drove close to the green, and was unable to salvage par much less birdie, he recovered, hit a perfect drive at 18 and a wedge to about 15 feet. It then came down to Ayers’ putt on 18.

“My goal was to give myself a putt to win or tie at the end,” said Ayers, with dad Stephen as his caddie. “And I did that. But let’s face it, I wanted to win. Yesterday I gave myself a lot of makable putts that just missed. That really was the difference. I could have gone really low yesterday and I didn’t.”

For Ayers, who threatened the lead early in last week’s Open and played his way into the round of 16 at the Amateur, it’s been a very good summer. “I’ll be back. See you next week,” he as he left, referring to the Russell C. Palmer Cup, August 17-18, at the Country Club of Waterbury.  Ayers plays out of Goodwin Park Golf Course in Hartford and for a while this week the Public Links looked to be a Hartford affair.

Two other Hartford golfers, both from Keney Park, were in the mix. Seth Jainchill shot 69 today and finished -4, in third place alone. Pat McGuiness, the two-time senior major champion who shot 69 yesterday, finished T16 at plus three. 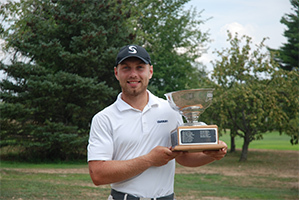 Eric Bleile, who shared the lead yesterday with 68, was victimized by errant tee shots today—“it was going both ways, right and left,” he said—and managed a 74 to tie fifth with Alling Memorial’s Jamie Sheltman, who may be the steadiest Connecticut golfer not to win a major. Sheltman shot his second consecutive 71. “I’m going home to work on my putting,” he said with a smile when it was over.

Though he’s headed for an extended training period, Roche says golf will always be part of his life. He’ll train for two months in San Antonio and then for a year in Seattle. There he’ll be part of the SERE (Survival, Evasion, Resistance, Escape) special ops program where he’ll learn to train pilots and other Air Force personnel at risk of capture and isolation. The unit’s mantra is “Train Others to Survive.” Roche said he chose the Air Force program because it was understated, or at least less promoted that some of the other services, which matched his personality. 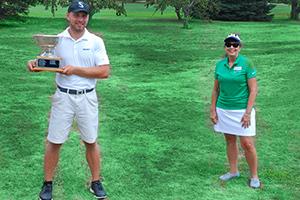 His job could take him anywhere in the states or overseas. But Connecticut will always be in the picture. “I’ll be back for a month each summer and I’ll play competition,” he said. “I’m not done with golf.”

The 2020 Connecticut Public Links Championship, open to golfers at public courses with handicap indices of 9.0 or less, was presented by GOLFTEC, the golf instruction and club fitting company headquartered in Denver with two centers in Connecticut. Michelle Souza (photo) represented the company in congratulating Connor Roche and all the competitors and expressing her company’s dedication to public golf.

“We are very grateful for GOLFTEC’s sponsorship of this great championship,” said CSGA Executive Director Mike Moraghan. “In Connecticut, the vast majority of golf is played at public venues. So this is a very important championship and we thank GOLFTEC for its support.”