July 3—West Hartford. There are a lot of ways to win a golf match.

Using only 13 putts over the first 12 holes is one of them.

But in today’s brilliance-shortened round, “Vas,” as friends call him, made 5 birdies and an eagle, pitching in on the final hole, the par-5 12th, to the delight of a couple dozen fellow members who followed the match. Had Vasington parred the final six holes, he would have shot 65. Based on the first 12, it promised to be even lower than that.

“Whenever I was tempted to get ahead of myself, I said, ‘I’m doing this for them, I’m doing it for the club,” said a delirious but stunned Vasington, 61, in his Donald Ross/Wampanoag hat, afterward. “That kind of deflected the pressure away from me. I just kept thinking, one swing, one swing. I don’t think it will sink in for a while. But I’m really happy for Wampanoag.”

Vasington said he was in and out of rhythm early, making several less-than-perfect swings. One of those, however, seemed to ignite his takeover of the final match. At the par-4 seventh, from the fairway, he hit a "heavy" short iron well in front of the elevated green. Kraczkowsky was on and fairly close. Vasington pitched to five feet. Kraczkowsky missed, Vasington saved his par and remained  2 up. He then hit the par-4 eighth and the par-3 ninth with crisp irons and sank birdie putts of 18 and 20 feet respectively, the latter a tricky downhiller from the back of the green. Suddenly he was 4 up, and a match that had felt close up until then now felt almost over.

A multi-times senior club champion at “the Wamp,” Vasington describes himself as a mostly self-taught, “converted soccer player,” who has taken only a handful of lessons.  He got serious about golf late, after a college soccer career at UMass, the decision not to turn pro, and law school, to work on the sport his late father taught him as a teenager. He joined his first club at 47. His father died last year and when Vasington began to talk about him after today’s victory, he was emotional. “He would be proud,” was all he managed to say.

This is not Vasington’s first senior CSGA championship. He won the 2014 Senior Amateur at Wethersfield, but ran into a rough patch with his golf game after that.  “I got to the point where I said, okay, I’m going to hit the ball further,” he said. “I kind of lost my tempo, lost my rhythm and for about year and a half, almost two, I just wasn’t there. About three months ago I had a little revelation and when I’m doing it right now it feels pretty darned good. I think when I tried to hit the ball further, I started to rush that transition from the top. Now, when I’m playing my best, I make sure I wait at the top.”

That more orderly transition from the top of his backswing was noticeable today, though he said it wasn’t always automatic. Honestly, this afternoon I made some bad swings, but I told myself, okay, make a good one now.” Vasington said he tried throughout the tournament to focus on the shot in front of him, nothing else, and it was a formula, and a patience, that paid off. 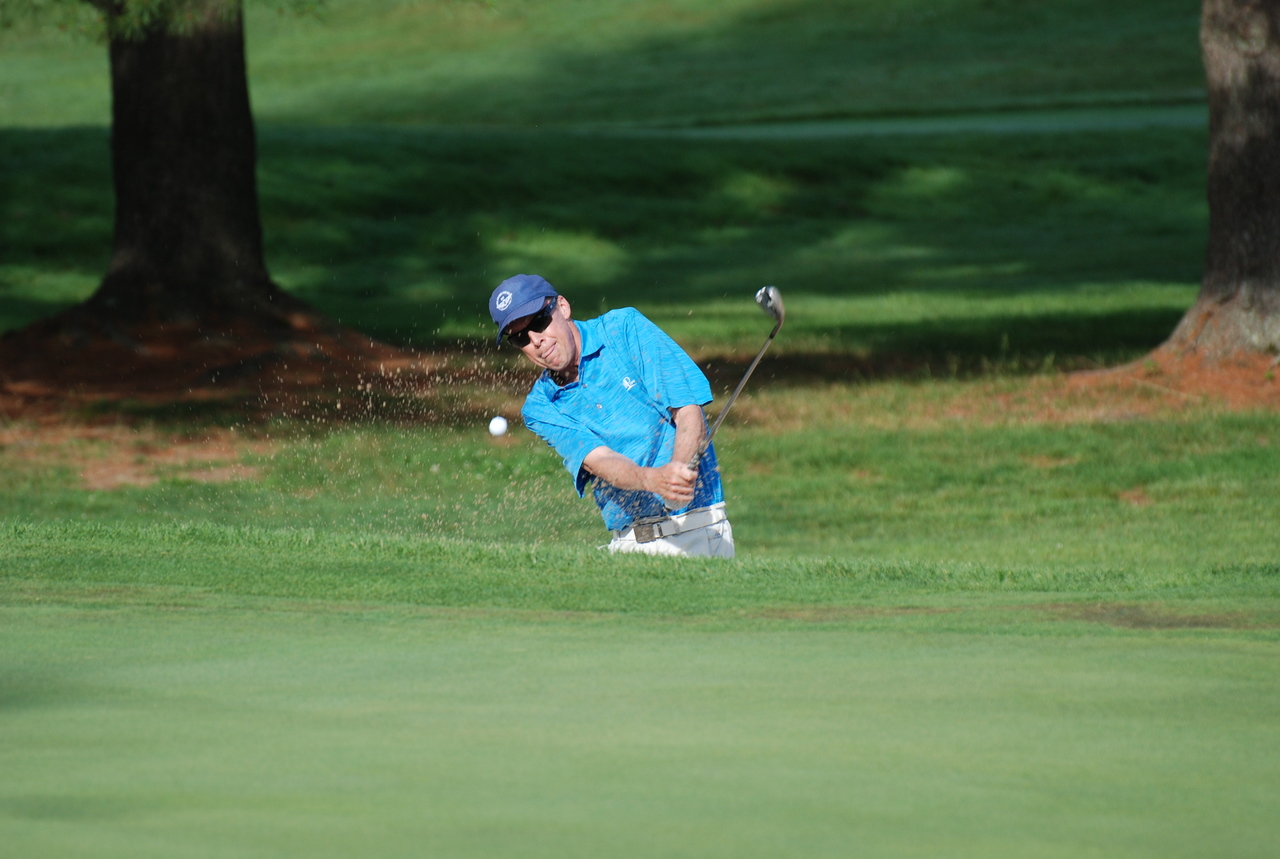 On Wednesday morning he met Dave Jones  (first photo), the No. 16 seed who Tuesday upset co-medalist and four-time Senior Match Play champion Dave Szewczul. It was a closer match than the final score indicated. Jones, who is recovering from recent cancer surgery and radiation, put up a game fight, but was just “that much off” and against Vasington’s steadiness, and mastery of Wampanoag’s puzzling greens, it was not enough.

“I’m happy with the way I played,” said a tired Jones after. “I think I was two over. But Mark was two under. He played very well.” Jones, who had surgery in December and both chemo and radiation early this year, was exhausted for three months, and showed signs of fatigue on Wednesday. He hit several shots right, found a half dozen bunkers and survived on his deft short game. “My swing was just a little off, not that much,” he said. “But not quite there.” 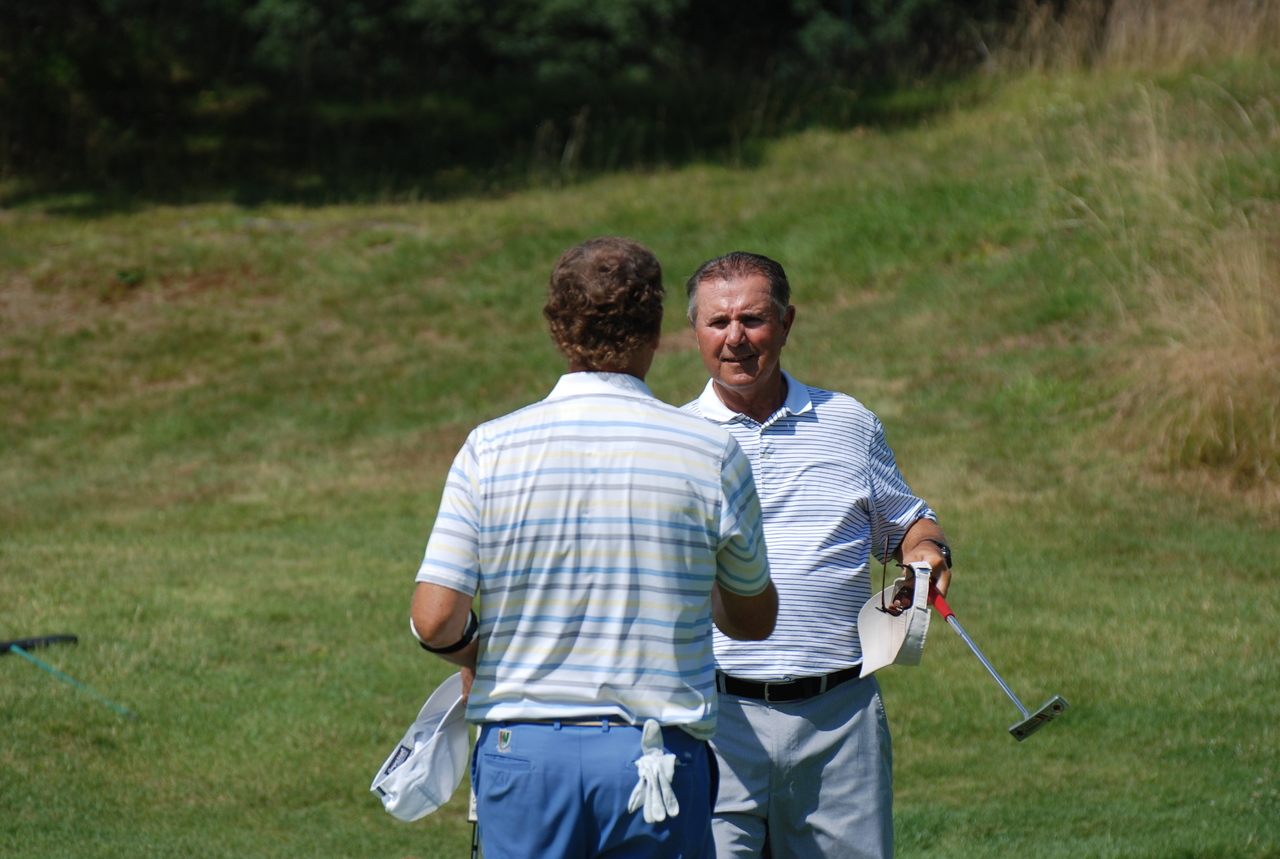 For his part Vasington made only two bogeys against Jones, none against Kraczkowsky, and with four birdies in the morning and five more  and an eagle in the afternoon, there was no stopping him. “You ran into a buzz saw, Kraz,” someone said. “Hey, that’s golf,” said a gracious Kraczkowsky. “One day I’ll be the buzz saw.”

Kraczkowsky, (second photo) who plays out of Blue Fox Run, gained the final by winning a battle of big men in the morning. Both over six feet tall with hands like mitts, Kraczkowsky and Bob Murphy, Jr. of Brownson slugged it out for 17 holes.

Murphy landed a haymaker on the first hole, draining a thirty-footer from off the green for a birdie and a quick lead. The pair traded blows for the next four holes, tying only the par-5 fourth with fives, as Murphy built a two-up lead after a loss at two, but wins at three and five.

On the downhill, par-5 sixth both missed birdie putts that would have won the hole.
Kraczkowsky’s bold attempt from 9 feet wandered 6 feet by, but the former champion buried the next to keep from falling to three down.

With a sloppy bogey, Murphy gave one back at the eighth. Routine pars on holes 9 through 11, and shared birdies on the par-5 12th, left Murphy one up.  At the difficult 225-yard, par-3 13th Murphy salvaged a tie with a brilliant bunker shot to gimme distance. 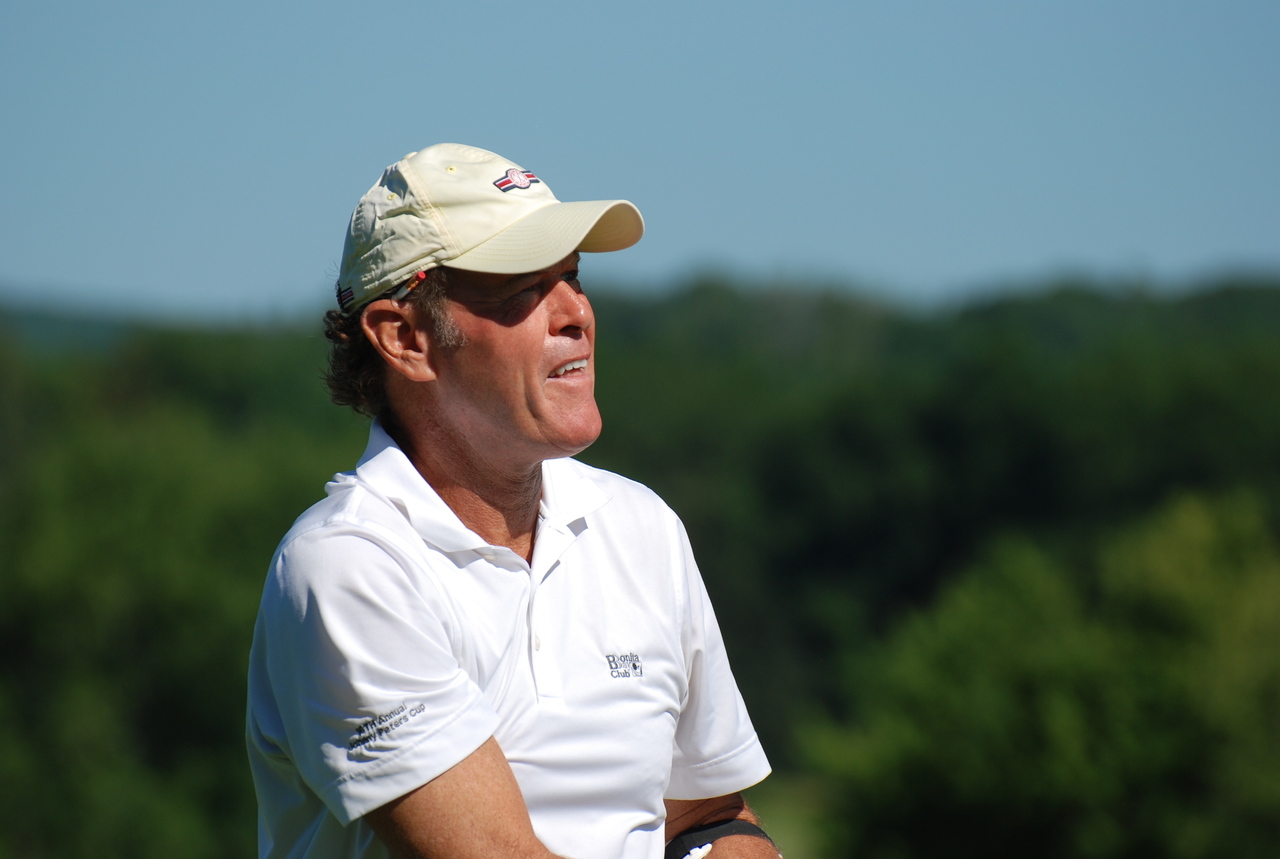 From that point on, Murphy (bottom photo), one of the longest hitting seniors in Connecticut, suddenly could not locate the fairway. His tee shot on 14 found tree trouble left, and with his ball resting on a root he could do no better than bogey to Kraczkowsky’s par. Match tied. A Kraczkowsky par on 15, and a birdie from five feet on the par-3 16th, left him two up with two to play, and when Murphy failed to get up and down at the par-4 17th, “Kraz” as he’s known to friends, was in the final.

His opponent, unfortunately, was that buzz saw.

“Sometimes I get into matches like this, you know, and it’s like I get better. I don’t know what happens,” said Vasington. “The focus is better, and I start seeing things better.”

Seeing five birdies and an eagle, for example. And never seeing the final three holes.