As was the case last year, Bob Murphy of Brownson was co-medalist at the Senior Match Play with 71.

July 1—West Hartford. Coming off a year of surgery and a rusty, recovery spring, Dave Szewczul didn’t feel good about his 71 today in the stroke play qualifying of the Senior Match Play at Wampanoag Country Club Monday.  Szewczul felt way better than that.

“I feel absolutely great, great just to be back,” said Szewczul who has won this championship four times in its short 12-year life. It feels almost surreal to be able to come out and compete and see all my fellow competitors and be healthy and just be able to play.”

The fact that the 71 tied for medalist with another 71 by Brownson’s Bob Murphy, and the leaderboard looked the way it always did before Szewczul shut it down last year, was beside the point. He felt almost no pain, he said, and that was a victory.

Szewczul confessed to being not quite back in competitive mode.  “I’m trying to get back in the feel of being competitive again,” he said, “but you need rounds and I haven’t been able to play that many. The weather….and my health still isn’t totally there to practice. Out on the course you’re not as sharp mentally as you’d like to be.”

All that said, Szewczul was thrilled to be back in the hunt. He said the weather, breezy but in the 80s—helped. He certainly got off to a hot start, birdieing four of the first six holes. He got it to minus three with a birdie at the par-5 12th and, despite two late bogeys, finished under par, along with Murphy, one of only two players to do so.

The weather didn’t help everyone. For the most part, scores were on the high side, as the undulations and topography of Wampanoag, which isn’t that long a course—6400 yards—extracted a toll, especially on the final nine.

The cut was plus-4 76, no playoff necessary. Rick Malafronte, John Svetz, Jeffrey Dolin, Richard Wilczewski and Dave Jones all tied for 12th.

Sixteen players will meet in the first round of matches tomorrow morning, followed by quarterfinal matches in the afternoon. 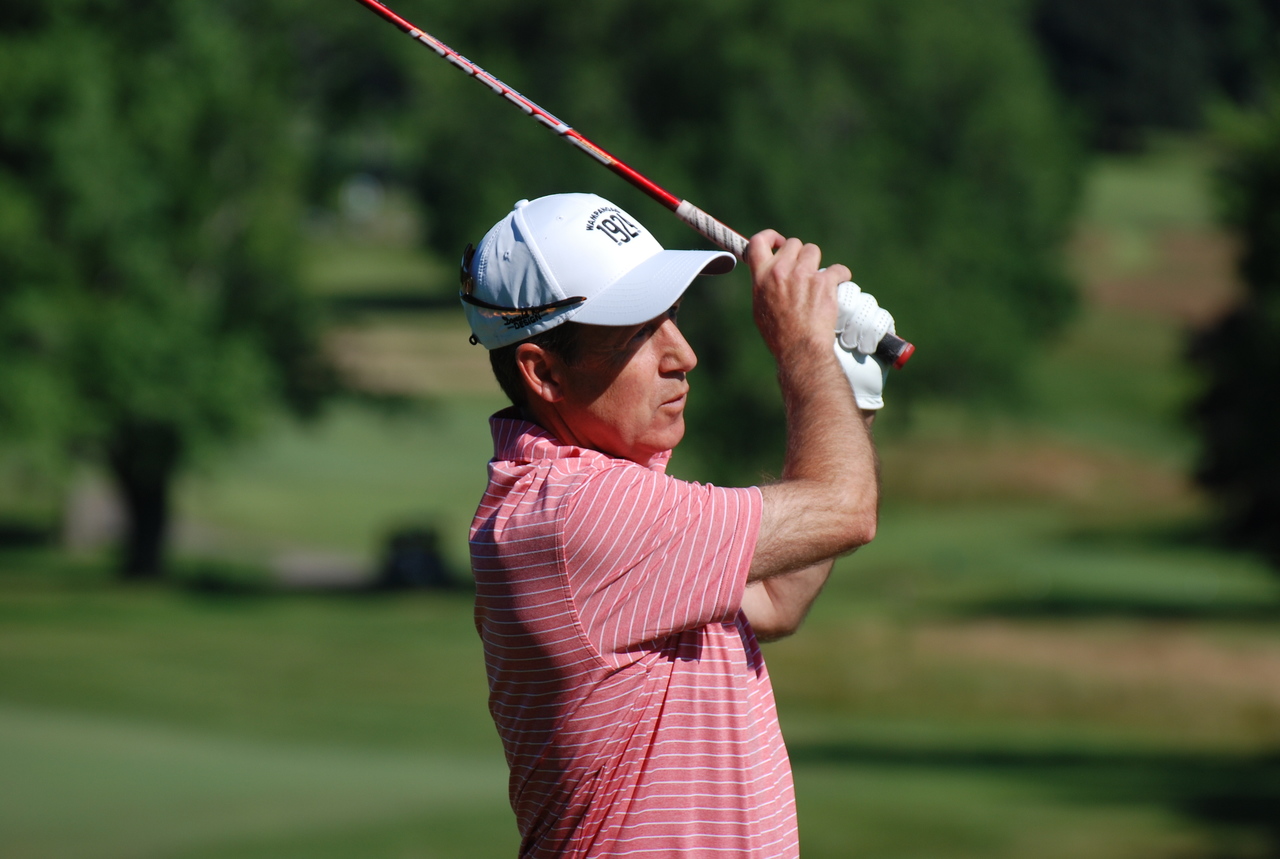 Behind Murphy and Szewczul was Bruce Kraczkowsky, the 2016 Senior Match Play Champion from Blue Fox Run, at 72 (even par), Mark Vasington of Wampanoag  (photo) and Paul Fitzsimmons of Brooklawn, who in May won the Met Golf Association Richardson Memorial at Wheatley Hills, at plus one. Vin Capece of Watertown was minus two on the front, but shot 40 on the back to finish at plus 2.

Murphy and Szewczul played in the same group with Mike Hooper, the 2018 Match Play runner-up, who would also have been near the top of the leaderboard had it not been for a quadruple-bogey nine on the par-4 15th, where he hit two balls out of bounds. He finished at plus six, two out of a match-play spot. Also out of the matches at plus 6 was defending champion Patrick McGuiness of Keney Park, who had two birdies on the front but finished 38-40-78.

Murphy said his pairing with Szewczul and Hooper helped. “It was a great pairing, really, because for the most part we all played well and that helped,” said Murphy, who said he dedicated himself this winter in Florida to playing more tournament golf. He won the Bonita Bay Club Championship before coming north and said it all helped. “I played a solid round today,” said Murphy, who made three birdies in shooting 34 on the front. “Hit a lot of greens, no three-putts. You know you can’t win it today, but you can definitely lose it so I just tried to keep it under the hole, which you have to do here.” Murphy birdied three times on the front, once on the back. What he’ll be working on now is correcting a mistake he made after medalling last year.

“I won’t take anything for granted,” said Murphy. “I played a friend of mine in the first round last year and just got a little casual about it and he beat me in extra holes. He played well. Hopefully I can take that experience and improve on it this year.”

Established in 2007, the Connecticut Senior Match Play is the youngest CSGA Championship. It is the first of two majors for players 55 and over, the second being the 74-year-old Senior Amateur, to be held this year at Black Hall Club, September 23-24. Monday’s 16 qualifiers will play 18-hole matches until eliminated, with the 18-hole final Wednesday afternoon, July 3.