Old Greenwich (October 7, 2020) After nine holes of his final match against Dave Szewczul in the 14th Senior Match Play at Innis Arden Golf Club Wednesday, Mark Vassalotti found himself in a place most people never see.

He was two up.

But Szewczul, like a marathoner timing his kick, quickly erased that lead and by the 15th hole had built a two-up lead of his own. It wasn’t perfect golf, he said after, but in the end it was a perfect fifth victory in the Match Play, and his 2-up victory assured him of another Senior Player of the Year title.

“My back was tired today,” said Szewczul, 66. “It’s been a lot of golf, with COVID and the tournaments pushed together, you don’t get the time to relax that yo 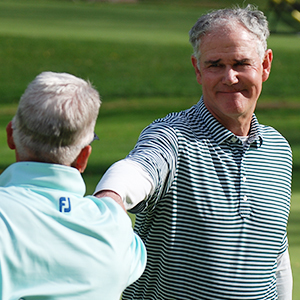 u normally do. So I’m a little tired, a little mentally fatigued I think. But you know I hung in there. I kept playing it shot by shot. That’s all you can do. I told myself anything can happen.”

For the man who has won every amateur title there is to win in Connecticut golf, most multiple times, his comeback started with a chip-in birdie at the uphill, par-3 tenth. It was propelled by an improbable birdie from the rough at the long, par-4 12th. And it included two nifty up-and-ins from green side bunkers—for par on the long par-4 13th, where he went one-up for the first time, and at the short par-4 14th, nearly holing the sand shot but making a tying par. Then, on the long downhill, par-4 15th, with the wind blowing hard now, he played safely to the left of the green and won when Vassalotti found the water fronting the green. When Szewczul hit a nearly perfect hybrid directly over the pin to 15 feet on the 190-yard, water-hugging 16th, his lead was nearly insurmountable.

Szewczul’s tee shot at 16 forced Vassalotti, who has had back problems of his own, and had not played either the Senior Amateur or the New England Senior Amateur this year, to be perfect from that point on. He came close. Vassalotti made a clutch par putt at 17 to extend the match, but a hybrid held up by a stiff wind at 18 found the bunker fronting the par-3 green. Szewczul, seeing that and going to a longer club, closed the door with a perfect shot to 15 feet.

It was his third senior title of the year. He also won the Super Senior at Longshore in July, and then New England Super Senior in New Hampshire in September. For Vassalotti, of Sterling Farms Golf Club, it was a different kind of victory.

“I’m just happy to be standing here,” he told Szewczul when it was over. “I haven’t played for six weeks, so just to be here and playing is great.” The two finalists then talked for five minutes about backs and surgeries—Szewczul had multiple surgeries two years ago on his back, his knees and his eyes—and the champion’s last words to the runner-up were: “Avoid surgery if you can.”

Such is senior golf. But tired backs or no, Innis Arden witnessed some stellar golf Wednesday in winds that ranged from 10- to 20-plus miles an hour.

In the morning, Vassalotti won his semifinal match against Paul Fitzsimmons of Brooklawn two up, (closing out a man who on Tuesday came all the back from five down with five to play to win), with a pitch-in for par at the 17th. “Hey, that’s what I’m supposed to do,” laughed Fitzsimmons. “He read the script wrong.” Six down after nine, Fitzsimmons won the 10th, 11th and 12th with two pars and a birdie (at the par-5 11th) to reduce the lead to three. Vassalotti birdied the 14th and was dormie four. But he found the water at 15 on his second shot, and at 16 on his tee shot, to see his lead reduced to two before his pitch-in ended things, 2 & 1.

For most of the semi-final match between Szewczul and 2018 Match Play Champion Pat McGuiness, things were much closer. Again, Szewczul came from two down to square the match at the par-5 11th. He won the uphill 12th with a par, the short par-4 14th with a birdie and the 15th with a par, making a downhill 8-footer after McGuiness had salvaged a post-water-shot bogey. They tied the long par-3 16th and suddenly it was over. "He’s impressive,” said McGuiness afterward. “You just can’t make a mistake against him. But that’s why he’s so much fun to compete against.”

Said a tired champion after his fifth round of the week, commuting from Farmington for three days to play: “I didn’t have my A game today. But you tell yourself to hang in there. No lead is insurmountable. It worked out. And I’m happy, because it feels like I’m back.”