Jen Holland of Lyman Orchards, who won the Amateur in 2008, could not get putts to fall on the back nine.

Harwinton (July 23, 2020) The Connecticut Women’s Amateur is not match play, but on the back nine at Fairview Farm Thursday it became that. A match of generations, a match of experience, a match of the newest face of women’s golf in Connecticut versus the long established.

In the end, 15-year-old Sophia Sarrazin of the Patterson Club played like the unflinching veteran she will become, shooting the lone sub-par round of the championship, 71, and winning by four over last year’s Women’s Player of the Year, Jen Holland, who won this championship in 2008 and today took the Senior Division (ages 50-59) trophy. Holland was three over—75—and with 74 yesterday five over for the championship. Her second-place finish was, by her count, “about my fifth.” 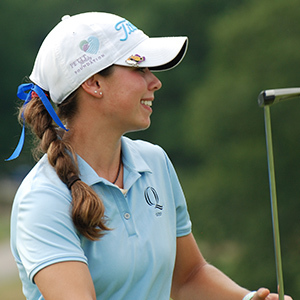 Wednesday’s leader, Mia Grzywinski, a 19-year-old Quinnipiac sophomore from the Country Club of Farmington (photo), followed yesterday’s 73 with 80 and tied with Gia Watkins of Brooklawn Country Club for third. An unfortunate bounce on the par-5 third, where her second shot, only slightly off line, bounded into deep rough and led to a double bogey (while Sarrazin and Holland were birdieing) created a ditch that, despite solid play, she was never able to climb out of. “I’m disappointed,” said Grzywinski, “but honestly I learned a lot today. I probably learned more than I would have if I’d won.”

Watkins shot 75 to go with yesterday’s 78, also finished at nine over par, and took the Super Senior Division (60 and over) by 12 shots.

Sarrazin’s steadiness on the back nine won the day. After a rare bogey on the par-3 tenth, causing her lead over Holland to shrink to two, she bounced back with an 8-foot birdie on the par-4 11th, and never led by less than three after that. Even a drive into the left penalty area on 15, leading to her third and final bogey of the day (against four birdies) didn’t upset her. Perhaps because it was then she got a little advice from “caddie” Susan Sarrazin, her mother, who drove the cart for Sophia as she had yesterday. “At that point my mom just told me, ‘Relax. Breathe!!’” laughed Sophia. There were no more flinches to follow.

Her goal Thursday, she said, was to play “fearlessly.” “I wanted to play with confidence and finish in a good position whether that meant winning or not.” She kept that attitude to the end. Of the back nine, she said: “I didn’t want to play like I had already won. I wanted to play like I was still trying to win. Because anything can happen on the last three holes. And I think I did.”

For her part, Holland felt the frustration of opportunities not seized. Three down going into the back nine, and only two after Sarrazin’s bogey at 10, Holland would not birdie for the rest of the day. She was unable to hit a short approach close on 11, where Sarrazin birdied, and on the short par-4 14th three-putted from the fringe after Sarrazin, who left an approach 40-feet short, deftly lagged close.

“My first putt didn’t break the way I thought it would. And then I wasn’t able to make the four-footer. That one really hurt,” said Holland. After birdieing both par 5s on the front nine she played those on the back one over, failing to get up and down for par on the 16th after a short approach—a miscalculation she said—followed by an indifferent chip. Sarrazin, meanwhile, cozied a long, green-side chip at 16 to a few feet and converted, the final dagger. In the end, Holland had two bogeys and no birdies on the back, Sarrazin two bogeys and the birdie at 11.

“Sophia was fantastic. She and Mia both hit shot after shot that were great,” said a gracious Holland after. “It’s disappointing to lose, but I’m happy to be competitive. My game today wasn’t stellar. Too many blunders.”

Sarrazin also won the Junior Division of the championship, open to players 17 and under. Jensie Nicholas of Tashua Knolls was second.

In the new “Open” division, ages 18 to 49, Grzywinski won by six over Caroline Petchark of Great Neck Country Club and NoraNoel Nolan of Shorehaven.

But it was Sophia Sarrazin’s tournament in the end. “She held up so well under the pressure of being in the final group,” said Debbie Johnson, who was second in the Senior Division. “Jen didn’t lose it. Sophia won it.”

“It’s very exciting,” said Sarrazin, who last June in her second AJGA start won the Mahoning Valley Hospital Foundation Junior All-Star in Boardman, Ohio. “I was very nervous coming into the end because I realized that this is a big tournament with a lot of really amazing players. So it means a lot to win it.” Sarrazin and her parents—dad Robert was on hand to see his daughter win as well—will have a couple days to celebrate and then it's back to "work." Sarrazin defends her Borck Memorial title at the Country Club of New Canaan this week. This fall she'll be part of the Hamden Hall golf program that includes Milford's Ben James.

The new Connecticut Women's Amateur Champion has set herself a high bar.