Leaning Into the Lead

Patterson's Sophia Sarrazin, an AJGA winner, is just one back of Mia Grzywinski with one round to go.

Harwinton (July 22, 2020) Nineteen-year-old Mia Grzywinski, with something less than her prime putting game she says, shot 73 (+1) Wednesday at Fairview Farm Golf Course to take the lead in the Connecticut Women’s Amateur by a shot over Sophia Sarrazin of Westport, and Jen Holland of Middlefield (top photo), who won this championship in 2008.

Grzywinski, who’ll be a sophomore at Quinnipiac in the fall, three-putted from eight feet on the first hole and then played the last 17 at par, making birdies on two par 5s, the third and the 16th, and on the par-3 7th. A bogey on the final hole kept her from being the only player at or under par.

“I honestly didn’t putt great,” said Grzywinski. “I left a lot of birdie putts out there that I could have made. But it was still a lot of fun, that was the biggest thing." Grzywinski hit nearly every green. “I only chipped once all day and putted from the fringe a coupl 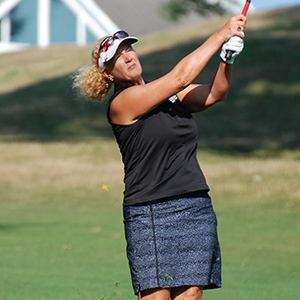 e of times and I hit a lot of fairways.” If the putts were to fall, Grzywinski said, “I could go really low here, I think. I can do better than I did today.”

She may need to tomorrow, especially if the other leaders get the hang of the greens. Grzywinski was not alone in her struggles on the putting surfaces, which were running about 9 on the Stimpmeter, but were much faster down grain and difficult to gauge when running away from approach shots, as they do at the first, the third and the eighth.

Sarrazin said she missed more than her share, too, and Holland acknowledged five three-putts. Holland made up for those on Fairview Farm’s four par-5s, which she played in five under par, chipping in for eagle at the third and birding the sixth, 16th and 18th.

“That’s a nice way to end, eh?” she said, smiling, at the 18th, after making a 15-foot downhiller for birdie, after what she described as “not such a good round.”

Holland leads the Senior Division of the Amateur by four shots over Mercedese Large of Wampanoag Country Club, who shot 78. But as a former champion it’s the overall title that Holland’s interested in. In a field filled with teenagers and collegians, and in a championship won of late by those young players, she said she would love to be able to say, “Score one for the seniors!” tomorrow. She was T3 last year at Oronoque. Holland is the most experienced player near the top of a very crowded leaderboard.  Defending Champion Meghan Mitchell of Oronoque, Jensie Nicholas of Tashua Knolls Golf Club and Genevieve Courtney of Candlewood Valley Country Club are all five over and tied for fourth.

Gia Watkins of Brooklawn Country Club, who shot 78, leads the Super Senior Division and is T7.

Mitchell, four back, sits just where she did last year after round one. She’d be much higher if it weren’t for the third hole, the one Holland eagled. Mitchell made eight there, a triple, and then reeled off 13 consecutive pars to finish within striking distance. Eleven players broke 80. Six are within six shots of the lead.

Sarrazin, 16, who plays out of the Patterson Club, leads the Junior Division by three over Nicholas and four over Ava Gross of New Haven Country Club. Sarrazin was well under par in a recent practice round here, but the putts were not falling the same way today and she took advantage of only one par-5—a birdie at the third—also birdieing the par-3 10th and the par-4 17th.

“I liked putting on these greens,” she said, 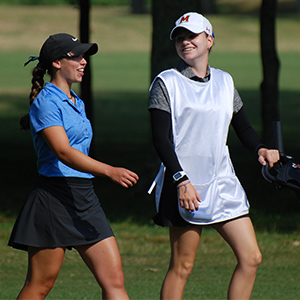 “though today I left myself in some tricky spots. My goal for today was simply to play confident, to play aggressive. I don’t like to play too conservative. I just think it’s better to go for the green and risk it to get the reward.” Sarrazin said there would be no change in the game plan for tomorrow. “I’ll try to play the same aggressive style because that’s what I’m comfortable with,” she said, “but try to make some more putts. I missed quite a few today.”

The Day One leader had a special green-reader today. Grzywinski’s friend Angela Garvin (bottom photo), a sophomore on the University of Maryland team, replaced her usual caddie, dad Geoff. “It’s so rare that she and I aren’t playing in the same event together, so I thought it would be great,” said Mia. “I had to break it to may dad.”

"I’ve been rejected before,” laughed Dad, who followed his daughter. “I’ll be okay.”