On a day when most struggled on Brooklawn's greens, Oronoque's Jordan Lintz made seven biirdies to tie for the lead.

June 4, 2019 – Fairfield: Five players shot 70, two under par today in the first round of the Connecticut Women’s Open at Brooklawn Country Club and were tied for the lead.

But you didn’t find them on the range afterward. It was best to check the practice putting green instead.

Someone asked Brooke Baker (lower right), who hit only four fairways, why she wasn’t working on her driving game. “Have you seen this course?!” she laughed, by way of explanation. “This is where it happens, on these greens. These greens are tough.”

So tough, in fact, that despite almost perfect conditions, only five players in the field of 77 beat par on the 5802-yard course—the five who were tied for the lead. 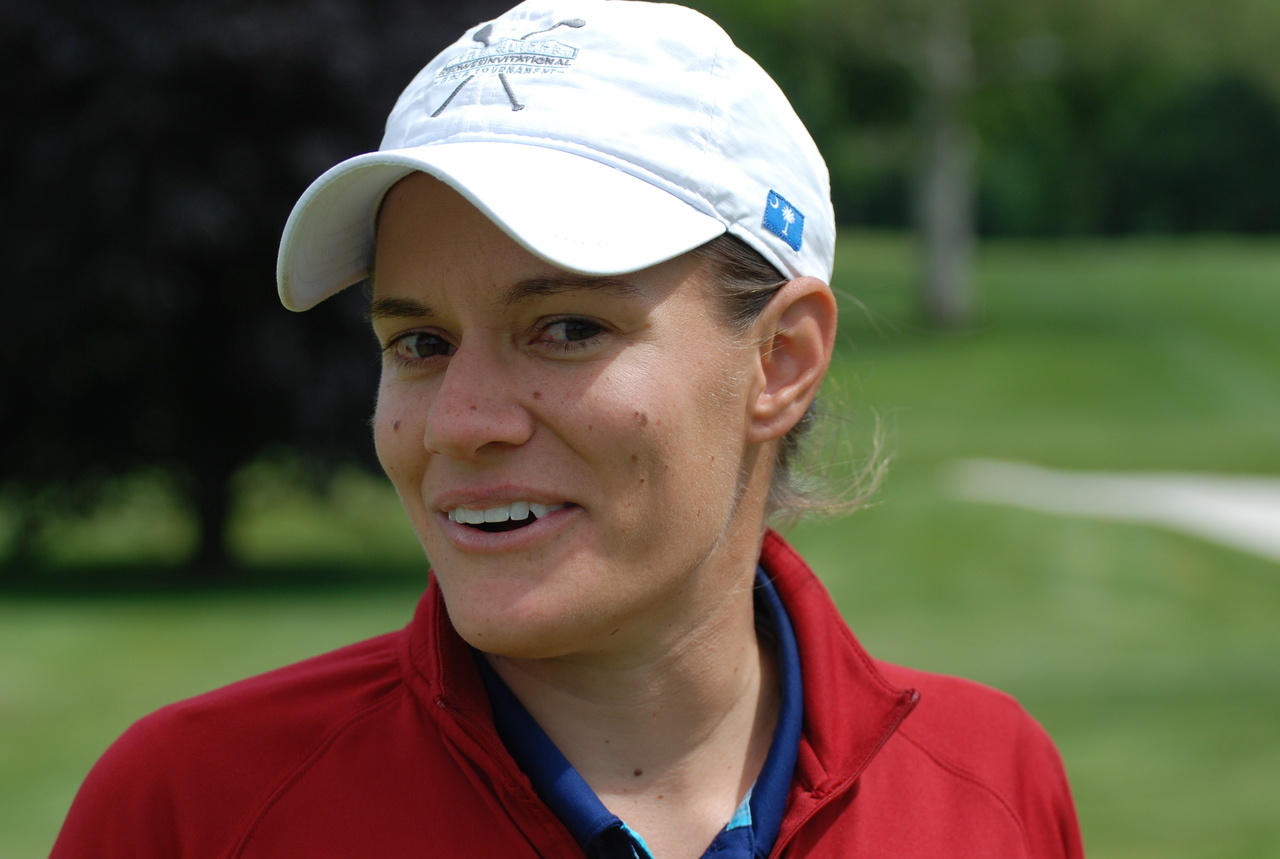 Besides Baker, who plays the Symetra Tour and is based in Florida, there were Loretta Giovannettone, an assistant professional at Woodway Country Club in Darien, Jordan Lintz, who teaches at Oronoque Country Club, Canadian professional Kellie Edelblut (lower right), and amateur Ami Gianchandani (below), the Ivy League’s Player of the Year from Yale.What separated them from the rest of the field was mastery, or surrender, to Brooklawn’s slick, heart-stopping greens. “I had a 7-footer for birdie on 15,” said Baker. “It broke two and a half feet. No lie.”

Baker made only two birdies, including that one, but holed a wedge from 66-yards for eagle on the par-4 17. The other leaders fared better. Lintz, the 2011 champion, made seven birdies, Edelblut five, Gianchandani and Giovannettone four each, with mistakes on or around the putting surfaces accounting for offsetting bogeys. 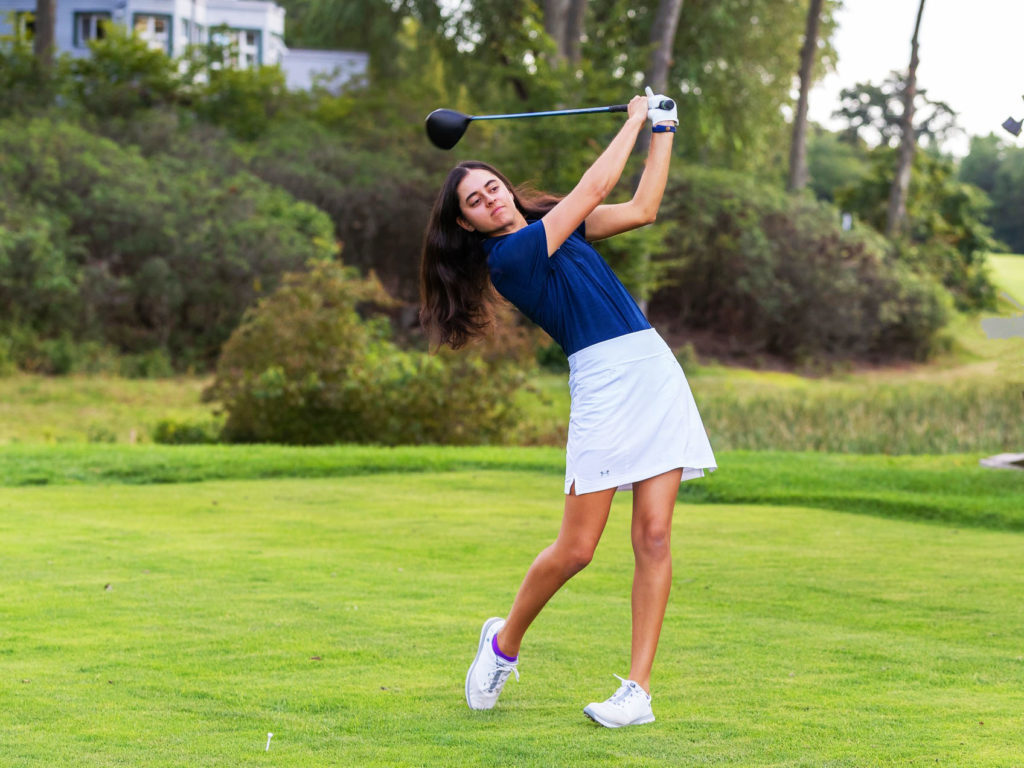 “I’ve never played here,” said Giovannettone. “But my members told me, ‘Hey, I played there and you need to keep it below the hole.’” Giovannetteone spends most of her time in Florida teaching and working on her game at High Ridge C.C. in Lantana, Fl. “Putting was huge this winter.” And it has paid off. Though she has had little time to play, the one competitive event she entered before this week, a Metropolitan Women’s PGA championship, she won.

Lintz, one of the state’s top-ranked teachers whose busy lesson book keeps her from playing much, stumbled out of the block, but with Brooklawn caddie George Santos reading the greens, she quickly righted the ship. After bogeying the first, third and fourth, she birdied six, seven and eight to get back to even par, then shot two-under 33 on the back. 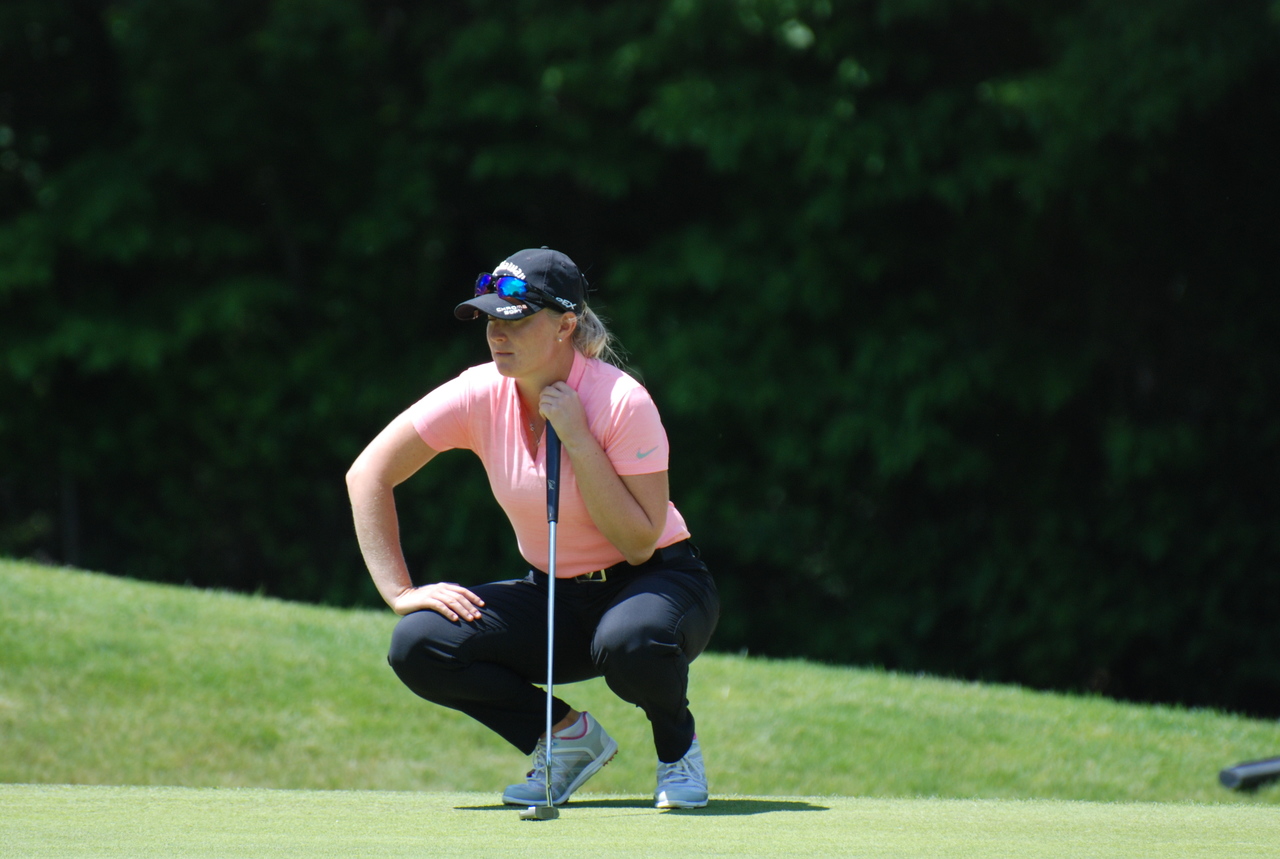 “It was rough start, it wasn’t pretty, but I calmed down and happened to roll some in,” she said. “But there were a few putts if they hadn’t gone in, they probably would have rolled off the green.” The severely sloped eighth, where she made a sidehill six-footer was one of those. Edelblut also birdied the short par-5, a hole that caused several players to hit putts back off the green.

With so much bunching at the top, Wednesday’s second round, in fair weather again if predictions hold, promises to be a shoot-out. Or at least a putt-out.

Three back of the leaders is Lynn Valentine, who won the Open in 2008. Kayla Lawrence, who won in 2017, is plus five and tied for 21st. Among amateurs, Alexis Hios is plus-three at 75 and, with Mia Scarpati, also T8,  Gianchandani’s nearest competition for low amateur.

But  don’t count out the Papa sisters, who, at ages 10 and 12, were, outside of those greens, the talk of the tournament. Vincenza “Vinny” Papa, the 10-year-old, shot 78 and is T26. Gianna, the 12-year-old, is plus 7. Papa Papa Paul, who caddied for Vinny, was beaming, especially when the fourth-grader got up and down for par on the par-4 16th and 18th holes. “She’s got hands like Seve,” he said. Mom Stacey was more understated about both girls. “We’re very proud,” she smiled.