2020 Sites: A Course in Design History

Shorehaven in Norwalk, by Scottish architect Robert White, will host the Amateur in June.

Architect Robert Trent Jones Sr. may not get the love today he once did, but his “heroic” designs, as they were called, characterized by large, gracefully cut bunkers and greens, as well as long “runway” tee boxes endure, providing both playable tracks for recreational golfers, and when prepared appropriately, great venues for championships.

It could be said it was Jones who paved the way for the golf boom of the 1950s and 1960s when Arnold Palmer, Dwight Eisenhower and a breakthrough technology called color television democratized the game and got so many people playing. In Hazeltine Country Club, Bellerive Country Club, Spyglass Hill and Firestone, he created courses that not only made Top-100 lists (about 50 of them have), but brought his version of the grace of Alister Mackenzie’s Augusta National, the place that inspired him, to the public.

Jones, who built some 400 courses in 45 states and 35 countries, spawned the careers of many course designers, including his two sons, Rees and Robert Jr. As the members of the Jones Society say, “He didn’t invent golf course architecture, it only seems that way.”

Jones courses will host two Connecticut championships in 2020, the Women’s Open at Rockrimmon Country Club in Stamford, and the Two Man Championship at Black Hall Club in Old Lyme. At Rockrimmon, built in 1947, a very busy Jones at the time got help from Orrin Smith on the second nine. That was added in 1949. The immaculately maintained course has hosted numerous USGA qualifiers, regional and state championships including the CSGA Mid-Amateur won by Brian Ahern in 2010.

At Innis Arden Golf Club in Old Greenwich, site of the CSGA’s Senior Match Play Championship, Jones remodeled the golf course in 1960. His design was renovated by Ken Dye in 2008, with green restructuring added a few years later. Innis Arden hosted the 20th Connecticut Women’s Open in 2018, won by now LPGA player Sarah Burnham. The club is home to Jessica Carafiello, annually honored was one of the best instructors in the country, who also won the 2016 Connecticut Women’s Open at Round Hill.

Black Hall stands very close to what Jones created in 1965. It is not long by today’s standards, but its tree-lined doglegs and its topographical rises and falls make club selection tricky. Scores at the Two Man Championship, though a team event, hover close to par each year. At last year’s Senior Amateur, Bill Hermanson, who plays at Black Hall, won with a total of three over par.

It’s also the year of Devereux Emmet in Connecticut. Less prolific than Jones, Emmet, who died in 1934, nonetheless contributed some of the country’s most highly regarded courses, including Garden City Golf Club on Long Island (with Walter Travis), two courses at Congressional Country Club near Washington D.C. (site of several U.S. Opens) and Wee Burn Country Club in Darien.

This year three of Emmet’s courses are part of the championship lineup: Ridgewood Country Club in Danbury, which will host the Open in July, the Country Club of Farmington, site of the Senior Amateur in September, and Hartford Golf Club where the Tri-State Matches will be played in October.

Ridgewood is celebrating its 100th anniversary. With land purchased in 1920 the first nine holes, now holes 10 through 18, opened in 1921. What is the front nine today came a year later. Geoffrey Cornish and Roger Rulewich (for 35 years Jones’ chief lieutenant) have both revised Emmet’s original design.

The course is hilly, tightly tree-lined in places, and while not lengthy, demanding for the accuracy it requires on approaches. 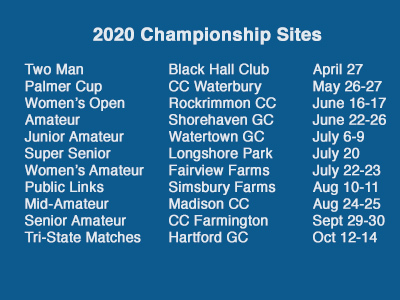 Gene Sarazen, who lived a few miles away in the early part of the last century, often practiced there. The first LPGA tournament in Connecticut was held at Ridgewood in 1968. This is Ridgwood’s fourth Connecticut Open Championship. It hosted previous Opens in 1955 (won by John Galeski), 1992 (Ken Green) and 2006 (Nick Cook). It has been the site of three Connecticut Amateurs - 1951 (James Healey, Sr.), 1981 (Jerry Courville, Sr.), and 2000 (Brian Hedstrom).

Former Connecticut Senior Amateur Champion Shawn McLoughlin plays at Ridgewood, as do two products of the club’s strong junior program, Alexsandra Lapple and Max Theodorakis, who was Low Amateur in the 2018 Open, T8 last year at Torrington, and certainly one of the favorites on his home course in 2020. Ridgewood, in previous opens, has identified several future Hall of Fame members, Healey, Courville, and PGA Tour winner Green among them.

Emmet also laid out the Country Club of Farmington along the Farmington River in 1924. It has been the site of many CSGA qualifiers and championships, including the 2018 Russell C. Palmer Cup won by Brian Ahern.  This year Farmington will host the CSGA Senior Amateur in September.

In Hartford Emmet and Donald Ross created another of the state’s best. Site of many CSGA and USGA tournaments, including the 2008 U.S. Girls Junior Championship won by LPGA star Lexi Thompson, Hartford is both beautiful and consistently rigorous. There are no let-ups here. It was a big hitter, Kyra Cox, who won the Connecticut Women’s Amateur Championship there in 2018. Its Red Course—Hartford has three nines and can play in various combinations—measures about 6589. Hartford underwent serious restoration by architect Bruce Hepner in 2017, with 16 tees added, bunkers re-shaped and all tees re-worked. It will host the Tri-State Matches October 12-14, when fall colors can make it breathtaking.

Another classic architect is responsible for multiple sites on this year’s schedule. Willie Park Jr., who designed New Haven Country Club, home of the annual Julius Boros Challenge Cup between Connecticut amateurs and PGA Connecticut Section pros, also designed the original Madison Country Club, site of the Mid-Amateur on August 24-25. At Madison, built in 1900, Park’s links-land feel has been restored by Brian Silva as of 2015. Five holes were redesigned completely, and every hole was affected. Greens were moved, some raised and almost all made larger. Fairways were re-grassed in pure bent grass. The par-70 layout was lengthened by some 200 yards to about 6520 yards and the resulting slope rating jumped from 127 to 134. Views of the shore make Madison especially memorable, but the winds off of it, a challenge.

At Shorehaven, which hosts the Amateur June 22-26, Scottish architect Robert White produced a masterpiece in 1924. Wind is the story at Shorehaven, especially when it prevails off the adjacent Long Island Sound into players’ faces on the long par-3 17th and across the tee shots and approaches at the 18th. Greens are generally slick.

Ray Underwood won the Senior Amateur there in 2018. The two previous Amateurs Shorehaven hosted were both won by Hall of Famers: Dick Siderowf in 1960 and Fred Kask in 1980. Siderowf also won the 1959 Open at Shorehaven.

In all, the 2020 schedule comprises a remarkable collection of architectural challenges from many of the best designers who ever lived.