CSGA (March 7)—Like the final day of vacation or the last french fry, the end of golf season always comes too soon. And usually lasts too long.

But not this year.

Lack of snow and mild weather have produced early openings and spring-like course conditions across the state.

“We’ve never opened this early,” says Rich Crowe, head golf professional at Rockledge Golf Club in West Hartford, who has been at the municipal course for 35 years. Rockledge opened Monday, March 3, with 71 players. On Tuesday they had 112.

“It’s really unusual,” says Crowe. “We usually aim for the third week of March. This year we’re not only open but [Superintendent] Tim Nadeau and his crew have been out there all winter cleaning up and clearing out dead trees, and people can’t believe the condition of the course. They say it’s awesome.”

At Stanley Golf Course in New Britain Mayor Erin Stewart, five months pregnant, hit the first shot of the season on Wednesday, March 5. Though Stanley always tries to be first, last year that shot didn’t happen until March 26. “The golf course is really important to us,” said Stewart to the audience of town officials, and several foursomes. Also watching the mayor was groundskeeper Sebastian Adorno, who said “We’ve never opened this early in the 18 years I’ve been here.”

Blue Fox Run Golf Course in Avon opened early as well and was one of the first to allow cart play. That’s paid off. According to Director of Golf Operations Jay Dennis, it’s meant 400—500 more rounds than a normal year. “We were about 4 weeks ahead of our typical opening near the end of March—last year March 23—and we opened whenever the weather looked good.”

Some private courses like Tallwood Country Club in Hebron have already opened. Others, like Brooklawn Country Club in Fairfield, are set to open next week. Almost all are ahead of last year’s schedule.

The courses that often stay open throughout the winter, such as Fairchild Wheeler Golf Course in Fairfield, or Shennecosset in Groton, have seen particularly robust winter play. (According to the National Golf Foundation and Golf Datatech, for example, rounds increased by 57 per cent in New England in January versus a year ago. The national increase was 11 per cent.)

“We’re way up,” said Steve Roach, head golf professional at 36-hole Fairchild Wheeler, where the Red Course is open during the week and both Red and Black are open on weekends for cart play. Roach report 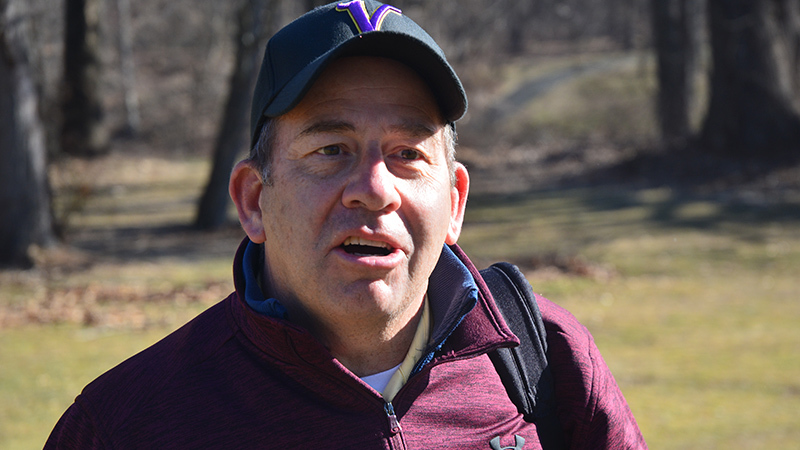 s that January and February jumped from 1397 rounds last year to 2941 this year, as revenue tripled. Players like retired teacher Tom Mastroni (photo) are taking advantage of the mild temperatures.

Rounds at Shennecossett likewise have soared. In January, green fees totaled 847, up from 368 in 2019, and member rounds nearly doubled to 501 from 274 in 2019. “We had a good year about 8 years ago,” said head pro Todd Goodhue, “but this eclipses that. Eric [Superintendent Eric Morrison] has been able to move cups and roll the greens because they aren’t frozen. We’ve had folks coming in saying ‘The greens are great!’ In February!” Revenue over the period of December, January, and February is up $30,000, to $100,000, he says.

The increase in play benefits more than just a course’s golf operation, and at Shennecosset, that’s especially true in the restaurant. On days throughout the winter when the course offered shotgun starts at 9:00 a.m. and 1:30 p.m., Goodhue says, “the bar area opened at 8:00 to sell breakfast sandwiches. There were many Bloody Mary’s poured, too. When the first shotgun came in at lunchtime the restaurant was packed.”

Cedar Knob Golf Course in Somers, which also stays open all year, has had what Head Professional Jeff Swanson said is his biggest winter ever.  Besides local players, “We’ve had people from Vermont, Massachusetts, New Hampshire and Maine play throughout the winter. We’re booked solid this coming weekend. We had 137 players on Tuesday, March 3, can you imagine?”

But Swanson is quick to mention that Mother Nature tends to balance things out. “Will it be a great year?” he asked. “It’s certainly reason to be optimistic. But it’s too early to be sure. I tend to look at the Good Friday/Masters period as the best indicator. So it remains to be seen.”

In golf they say every shot makes somebody happy. The shot that winter’s taken this year has been a delight to golfers, but not always the break golf professionals and superintendents had counted on. “I haven’t had a day off since Thanksgiving,” said one. “I’m not complaining, but…”

For a listing of CSGA Member Clubs and to contact a course about its status or plans to open, click here.