Mike Moraghan of the Country Club of Waterbury, and the CSGA, shot 34-36-70 to take second place alone.

Westport (July 20, 2020) On Monday Dave Szewczul won one of the few CSGA championships he has never won, the Super Senior, by two shots over Mike Moraghan of the Country Club of Waterbury Monay. Szewczul, of TPC River Highlands, shot 68 on a steamy Longshore Golf Course in Westport, the only player to score under par. Moraghan had 70 (+1).

“It feels good to know that I’m still competitive,” said Szewczul, who two years ago underwent multiple back, knee and eye surgeries. He was the 2019 Senior Player of the Year, but did not win. “I’ve felt a bit rusty this year too, partly because it was hard to get into a rhythm with the COVID situation. Physically I was fine, but the competitive side wasn’t quite there.”

It was today. Szewczul, in a sun-blocking floppy hat unusual for him, made nine straight pars on Longshore’s front side to shoot 35, then birdied two par fours on the back, the 12th and 17th, to finish with 33. His lone bogey came at the 388-yard par-4 16th. 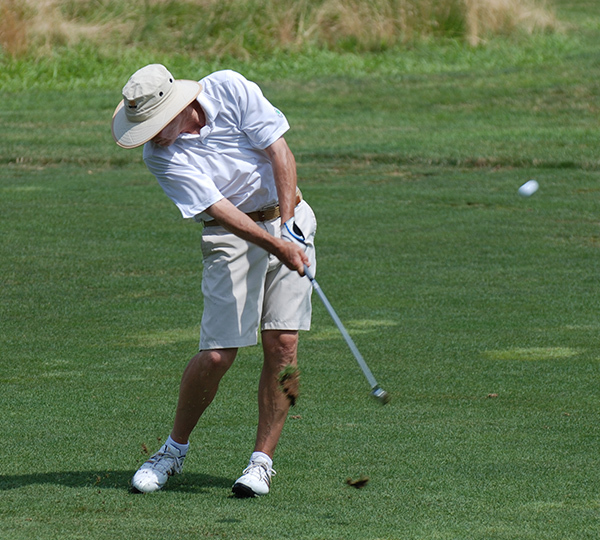 Groveman (photo) had other things to celebrate. He aced the 201-yard 13th with a four iron. Groveman has had three aces. His last was forty years ago. He was especially gratified, he said, given that he had spent weeks this spring in the ICU with a major heart ailment.

“I’m just happy to be here,” he said, “and this makes it all the more special.”

He also tied for first in the net competition, with 65. Also scoring 65 net were George Fjelldal of Hubbard Heights Mens Club and Bill Wininger of Tallwood Country Club.

Very humid temperatures in the 90s were punishing, no matter when comptitors teed off. It was still 90 when the final group, of Bill Dober, Tom Fox and Jim Brennan finished. But as with the first year of Longshore's hosting, there was praise for the course. Greens came in for special praise. "It's a strong golf course, and we playe it back," said one player. "The greens were perfect."