The Day brothers, Dan (left) and Ben, each qualified for two USGA championships in 2019

Which is to say that this year’s nine qualifying sites, including Connecticut National, the youngest of the courses, will provide proven tests for nine national championships.  "The goal each year is to find first-rate sites that will provide excellent playing conditions and a strong competitive challenge,” said CSGA Executive Director Mike Moraghan. "It is difficult to qualify for a USGA championship and it should be. We are very happy with the strong lineup of courses we have this year in Connecticut." 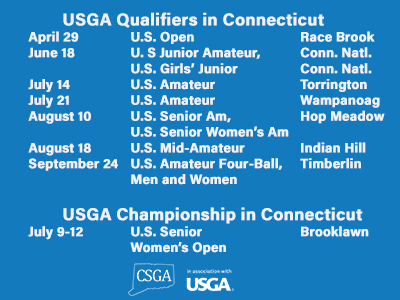 The 120th U.S. Open. A first-stage (local) qualifier for the U.S. Open Championship takes place April 29 at Race Brook Country Club in Orange. Race Brook has hosted five Connecticut Opens, the first one in 1941 won by the great Jimmy Demaret, and the last, in 1997, by two-time Open champion Mike Gilmore.

Designed in 1913 by the Scottish architect Robert Pryde, also the first Yale golf coach and first Executive Director of the CSGA, Race Brook has hosted many other championships and qualifiers, including five Connecticut Amateurs.

The 2020 U.S. Open is almost a home game. It will be played at Winged Foot Golf Club in Mamaroneck, New York June 18-21. It is the sixth time Winged Foot has hosted the Open. The championship is open to any professional, or to any amateur with a USGA Handicap Index not exceeding 1.4. Players (male or female) may obtain a place by being fully exempt or by competing successfully in qualifying. Players advancing from Race Brook will play in a Sectional Qualifier at one of six locations nationwide.

2020 The U.S. Amateur. Both Torrington Country Club and Wampanoag Country Club will host July qualifiers for the 120th U.S. Amateur, which will be played at Bandon Dunes Resort in Oregon, August 12-16. Torrington has been the site of four Connecticut Open championships, including last year’s won by Rasmey Kong, and two Connecticut Amateurs: 1994, won by J.J. Henry, and 2006, won by Tommy McDonagh. Torrington opened in 1929 and was created by Orrin Smith. Its qualifier is July 14.

U.S. Amateur entrants must have a Handicap Index of 2.4 or less.

The 66th U.S. Senior Amateur will take place at the Country Club of Detroit in Grosse Pointe Farms, Mich., August 29-September 3. It was at CCD that Arnold Palmer won the 1954 U.S. Amateur, setting the stage for his Hall of Fame career. It was designed by British architect Harry S. Colt and later updated by Colt/Alison, Robert Trent Jones, Robert Trent Jones, Jr. and Tom Doak.

The 59th U.S. Senior Women’s Amateur takes place at the Lakewood Club, Point Clear, Ala., September 12-17, a part of the Robert Trent Jones Golf Trail. The Dogwood Course there was designed by Perry Maxwell, who also designed Southern Hills in Tulsa, Okla.

2020 Mid-Amateur. On August 18 Indian Hill Country Club in Newington will host a qualifier for the 40th U.S. Mid-Amateur, Sept. 12-17. Indian Hill, a Roger J. Ross design, is the oldest of this year’s qualifying sites, having opened in 1899. The 2020 U.S. Mid-Am will be played at Kinloch Club in Manakin-Sabot, Va., and Independence Golf Club in Midlothian, Va. Last year 2018 Player of the Year Ben Conroy, his Connecticut Four-Ball partner Ben Day and Day’s brother Dan, all qualified for the championship. Brad Tilley, a former U.S. Mid-Amateur medalist, Pat Griffin, an Indian Hill member, and Glen Boggini of Manchester, have also qualified for the Mid-Am in recent years.

The U.S. Mid-Amateur is open to players who have reached the age of 25 and have a Handicap Index of 3.4.

In the U.S. Amateur Four-Ball each member of the side cannot have a Handicap Index exceeding 5.4. For the women that number is 14.4.

The U.S. Senior Women’s Open is open to competitors of 50 years or older with a Handicap Index of 7.4 or less.