Jay Abate, in gray, checked his score with fellow competitors while social distancing.

Waterford (June 11, 2020) Adam Friedman of Great River Golf Club and Kyle Roberts of TPC River Highlands were low at 72 (+1) among eight successfully qualifying at Great Neck Country Club, in the final qualifiier of the 2020 Connecticut Amateur. Great Neck's own Matt Fuller was third, with 73. Drew Brennan, James Bosworth, Josh Cameron, Shawn Hilario and David Baker also made the field of some 80 players at Shorehaven.

Chris Fosdick of Middlefield,  a star in his freshman year at Florida Southern, was one of two players to shoot even par and lead the qualifiers. Mike Carey of East Hartford Golf Club also shot 72 on a beatiful day that nonetheless did not yield loads of birdies. Fosdick was an exception. After starting his round bogey-double bogey and shooting 40 on the front, he made four birdies on the back, including the last two holes, to shoot 32. Carey's round was less dramatic. "Two bogeys, two pars, he said. "What worked today was my putting, though. I had no three putts. That's the part of my game that usually does me in." Tad Link of Shuttle Meadow Country Club , who finished at plus-one, was another exception. He made the turn at three under (with five birdies) and then slipped to 40 on the back. This will be Link's fourth Amateur. He has not played Shorehaven Golf Club before, though his game seems to match the track: "I'm not particularly long, but I'm really solid with my irons, and with the short game." Lyman drew praise from competitors. "It's as good as I've seen it," said Carey. "The greens were great and the fairways have really grown in." Jason Longto of Rolling Hills Country Club, not far from Shorehaven, was among three players at plus-two. Like a number in the field today, he confessed to being a bit rusty. "I really haven't had a chance to play. I haven't competed since October. So it was a matter up and down a lot today. But it's great to be back out here, and I'm excited to play at Shorehaven, which I love."

More Amateur Qualifying: At Oronoque Country Club on June 2  twelve players, led by Princeton freshman Jackson Fretty of Greenwich, among a field of 66, qualified for the Connecticut Amateur at Shorehaven Golf Club in Norwalk, June 22-25. This coming week two additional qualifiers will help set the field, smaller than usual this year due to COVID-19 considerations. Wednesday will see a qualifier at Lyman Orchards Golf Course, Thursday at Great Neck Country Club. By week’s end the field of 78 (against last year’s 120) will be set.

Fretty made two birdies and shot 74 (+2) in his first competitive stroke play round since October, as the college spring season was cancelled. Fretty finished his first year two weeks ago, the last quarter of which was long distance learning. “No matter what I shot, it was just great to be out here playing. IThe pandemic] has been an experience, and obviously things I’m dealing with are nothing like some of things people in our country our dealing with, but it’s great to be out playing again.”

Darien High School's Alex Gu shot 75 and was tied second with Joe Abate, 51, an Oronoque member who, until the final hole, led the proceedings. He was one of two Oronoque members that qualified. Matthew Thennes shot 76 to earn a spot at Shorehaven. “You have to be a scrambler to play at Oronoque,” said Abate, a former club champion, whose low round at Oronoque is 71, and who but for a double at the last would have had the low round. The member’s advantage, he agreed, was around the greens. “If you’re above the hole, you’re in trouble. If you stay below the hole, whether you’re short of the green and you chip it up, you got to make putts. But the greens today were beautiful.” Abate made two birdies, the double on 18 and three bogeys.

In retrospect it ought not to have surprised anyone that more than one Oronoque member qualified, given the difficulty and trickiness of the Desmond Muirfield greens, many of which resembled upturned soup bowls. “They reminded me of old Donald Ross turtleback greens,” said Fretty. “You aim for the center and if you don’t hit just right you know it’s going to slide away.”

Due both to those green complexes and Oronoque’s narrow, corridor-like fairways, scores were high. Eight of the 66 qualifiers did not break 90. Twenty-two did not break 85. Only 17 shot in the 70s, with all but five of those earning spots in the Amateur.

Pandemic precautions were enforced throughout. Players were grouped in threesomes and twosomes. All walked or rode one to a cart. There were no bunker rakes, and a ball-lift device attached to flag sticks allowed players to retrieve holed putts without touching the flagstick. Scoring was done entirely on smart phones, with no cards changing hands. In the scoring tent, scores were verified with a CSGA official as the two or three players stood in separate corners of the tent, 10 feet apart.

PHOTOS FROM ORONOQUE QUALIFIER AND WETHERSFIELD ONE DAY

One Day Tournament Series:  On the same day as the qualifier the CSGA’s first One Day Tournament took place at Wethersfield Country Club as the One Day Series, sponsored by Chris Cote’s Golf Shop, kicked off, too. Scores there were low. In the Dick Tettelbach (open) division, John Sawka shot 67 (-4). Sawka had more than his win to celebrate this week. On his 15th birthday this week, son Bradley made a hole in one on the 15th hole at their home course, Ellington Ridge Country Club. Among seniors at Wethersfield, Bill Hermanson shot 66 (-5). In net competition, Sawka and Carlo Guerrera led the open division with 69 (-2). The Dick Siderowf (senior) net winner was Tom Hurd with 66 (-5).

The One Day Series continues this Thursday at Torrington Country. That field is full, as is the field at Mill River Country Club in Stratford on May 15. 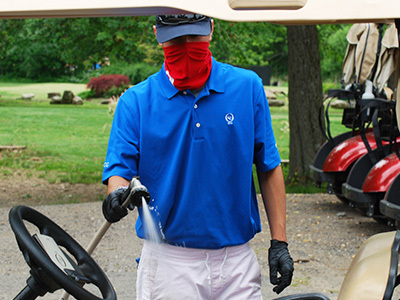 Research released this past week indicates a new willingness of sports fans to attend live events. According to a report by the “Back to Normal Barometer” consumer confidence group, the percentage of fans who are “ready to go tomorrow” has now reached 60 per cent, against 34 per cent on April 1. Jon Last, president of the Sports & Leisure Research Group, said that there remains a “residual hesitation” among a minority of fans who seek additional assurance from medical authorities.

Recreational Play: Despite the pandemic, and in part due to a mild March, play is up 8 per cent year-over-year, according to the National Golf Foundation, and Connecticut is no exception. Tee times, all done online now, were booked solid across the state, especially at courses in Fairfield County such as Longshore Golf Course in Westport or Fairchild Wheeler Golf Course in Fairfield, which were among the last to open. This was true of Longshore even before it allowed carts for the first time last Monday. “The demand is so high we are not even reserving blocks of time for our men’s and women’s groups at this point,” said Head Professional Jon Janik at Longshore, which will host the Super Senior Championship on July 20.

Whether at the Oronoque qualifier or the Wethersfield One Day competitors shared the same sentiment: It was just great to be back competing.

Successful qualifier Alex Gu, who lost his high school season as well as the title defense of the CIAC Open Championship this year, said it best, with a big smile: