This month James, the 16-year-old phenomenon from Milford, was one of twelve American junior golfers chosen to play on the U.S. side in the second Junior Presidents Cup competition prior to the Presidents Cup this December at Royal Melbourne Golf Club in Australia.

He got an email on September 10 that began:

“Congratulations on making the Junior Presidents Cup Team. I am excited to be part of this and December just can’t come fast enough.” It was signed Justin Leonard.

James was chosen, of course, because he earned it. 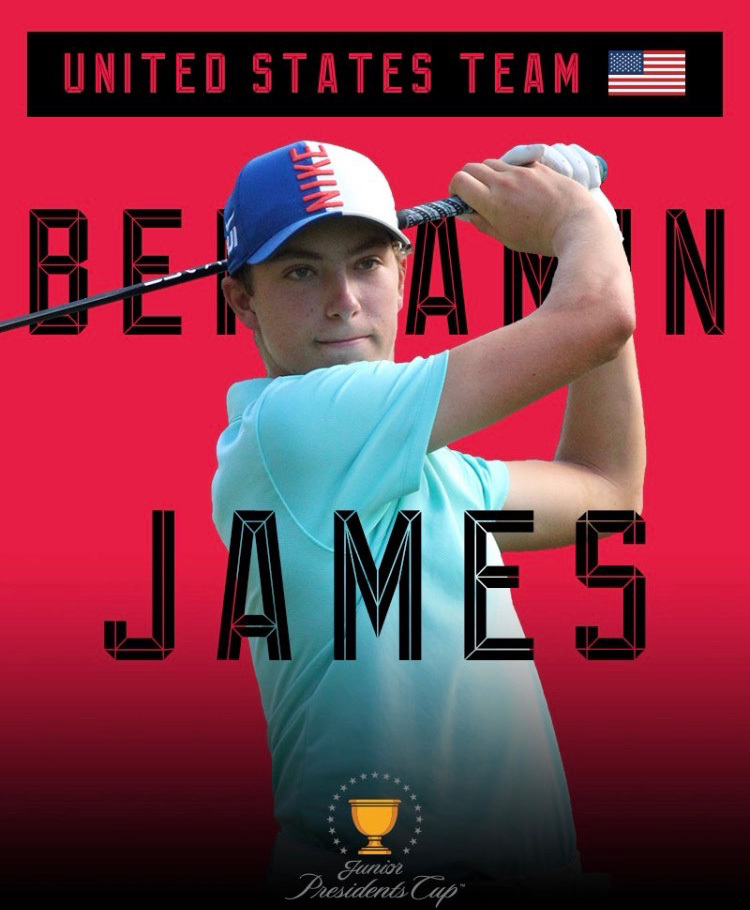 Qualification for the team is based on points, and with T19-place finish in the recent Junior Players Championship at the Stadium Course in Ponte Vedra, an invitational, James secured the 12th spot. It was the culmination of a summer in which James:

—Defended his title at the 18th Northern Junior Championship, August 5-7, at New Haven Country Club after winning in 2018 at his home club of Great River Golf Club

—Outscored all competitors in the six-state New England Junior Championship, August 11-13, at Mill River Country Club in Stratford, shooting  203 (-7) for three rounds and leading his Connecticut team to a 17-shot win, both accomplishments for the second consecutive year

For James, a sophomore at Hamden Hall Country Day, this breakthrough summer is the result of a great deal of daily hard work, much of it measured on a Trackman to keep his practice purposeful. Always close in the past, this summer James learned to win— and win consistently.

“I always knew I could do it,” he said.  “I was just not quite getting the win. Maybe I was a little young.  But age doesn’t matter really. I guess I somehow figured it out. I really can’t explain it.  I just got to the point where I trust everything out there.”

That confidence grew from James’ experience in the elite Wyndham field this June, where he placed second, “He saw that he could play with any of these kids,” says dad Don James, a former coach at Sacred Heart University.  That led to his first AJGA win at Killington and, a week later, at the state ’s Junior Amateur. The elder James also credits the Trackman “combine” tests in all areas of the game—as well as a favorable schedule as contributing factors. The national PGA Junior was in Hartford. The New England Junior was in Connecticut as well, at Mill River. There was less time spent traveling, more time for practice rounds, and for practice in general.

James has shown particular progress this season around the greens, a part of his game with which he struggled early in the summer. He’s worked with his dad and Great River Director of Golf Tom Rosati on chipping and putting. “My putting has improved a lot and my chipping is dynamite right now,” James said after the Northern Junior. ”I try to put myself in the hardest spots I can do. If I can get those up and down, I know I’’ll be alright.

These accomplishments have made James the No. 1–ranked golfer in his 2022 class, according to Richmond-based Junior Golf Scoreboard. He is 14th overall.

“I think Ben James has to be in the conversation for being the greatest junior golfer in Connecticut history,” CSGA Executive Director Mike Moraghan said. “I don’t know if any junior has had a better summer than Ben had.”

And that summer will be extended to late fall with a trip to the second Junior Presidents Cup ever.

“I am extremely happy, extremely excited,” said the normally even-keeled James. “I’m probably more emotional on the inside than on the outside.” Though James will miss some school competing at Royal Melbourne, he’s grateful that Hamden Hall administrators and teachers have been supportive and flexible. What’s more, he’ll use the experience as a learning process in itself, he says.

“I’m going to try to take in everything in.  I’m going to ask a lot of questions to Justin, and just try to learn about the game from his perspective. And meet other pros hopefully as well. I’ll need to make a list of questions before I go.”

And what would be one of those questions be, James is asked. He answers quickly:

"What do you think it takes to be a tour player?”