Editors Note: James Driscoll is a current member of the PGA Tour and graduated from the Taft School in Watertown, Connecticut in 1996. Driscoll went on to play at the University of Virginia, where Litchfield native and current CSGA Executive Director Mike Moraghan was his coach. Driscoll's accomplishments on the course include making the finals of the 2000 U.S. Amateur, playing on the 2001 Walker Cup and winning the Nationwide Tour's Virginia Beach Open in 2004.

If you would like to make a contribution to Driscoll's Birdies for Boston campaign, please visit this page and click the "Support James' Causes" at the bottom of the page.

HILTON HEAD, S.C- There’s something about a place. Like people, places matter. A place’s scale, scope and design serve as a map to one’s life. It’s where we come from and where we return to. No one has ever stated “This is my place” without both reverence and sentiment. More times than not, that same place is where our hearts lie.

Driscoll spent much of Tuesday and Wednesday on the phone and in the RBC Heritage media center getting the word out about his Birdies for Boston campaign.PGA TOUR player James Driscoll grew up in Brookline, Mass., just outside of Boston. As the youngest of seven children, it’s where actions and events morphed into memories, where lessons were learned and skills honed.

“If we weren’t running around playing games, we were out and about watching different teams in the area,” he recalled. “And the winters. I remember the hard winters. I remember the spring because that was the best time of the year. You were always thawing out from being buried under four months of snow. This time of year was always great for us as kids, even today. The energy’s great and everybody’s fired up for the good weather and the summer months to come. I couldn’t think of a better place to grow up.”
Brookline, he also remembers, is where he watched with youthful eyes as the world’s most elite runners competed annually in the Boston Marathon. Those were his streets, in his place. As a kid, it was something he looked forward to all year, every year.

Now grown and living on his own, home is a condo in downtown Boston, just two blocks from where Monday’s terrorist attack took place.

“I was in Jupiter, Fla., practicing,” Driscoll said from Harbour Town, site of this week’s RBC Heritage. “Before it happened, I contemplated going back home to be a part of the day there. It is such a fun day, a huge event. Patriots Day is a gigantic tradition in Boston. There’s the Red Sox game at 11:00 a.m. and then everyone just filters down to Boylston Street for the finishers of the race to come through. It’s just a big day in Boston.”

As everyone by now knows, this Monday turned out to be a big day in Boston for all the wrong reasons – at first. The heart of a place was cut up, but it wasn’t cut out. Driscoll is testament to that.
“As soon as I heard about it, I immediately thought of all my friends,” Driscoll said. “I had friends running it and a lot of other friends there watching it. I knew they were all going to be there on Boylston Street. Fortunately, everyone was ok. But, it makes you angry, emotions just flow. I decided I wanted to do something.”

Through his “Birdies For Boston” initiative, Driscoll’s goal is simple; raise as much money as he can to aid the victims and their families of the Boston Marathon tragedy. Driscoll spent much of Tuesday and Wednesday at Harbour Town educating players about the idea and encouraging them to spread word of “Birdies For Boston” via their Twitter and Facebook pages.

Every dollar raised will go to the One Fund Boston, formed by Mass. Governor Deval Patrick and Boston Mayor Tom Menino. From there, all funds go directly to the families affected by the bombings.
For the next two weeks, at the RBC Heritage and Zurich Classic of New Orleans, Driscoll will donate $1,000 for every birdie he makes. His fellow PGA TOUR competitors are encouraged to participate at a monetary level comfortable with them. 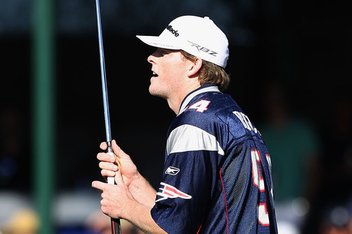 “As a born and raised Bostonian, I’m proud of James for what he’s doing,” said GolfWeek Magazine’s Jim McCabe. “Like all of us, he feels a sense of horror and shock at what happened so close to home….this IS our home. As Bostonians, we’ve always embraced Patriots Day, the Boston Marathon. It’s world famous. I’m just really proud of what James is doing.”

“Things like this unfortunately happen in the world, and you feel the pain,” Driscoll said. “When it happens in America, it hits home more. But, when it happens in your community, you can’t help but feel it way more. I live two blocks from where they bombs went off. That’s where I went to hang out. So when I see Boylston Street all over the news, covered in yellow crime scene tape, it just really hits home.”

Home. It’s a pretty powerful place. It’s not just an address or dwelling. It’s a past, present and future. It’s a guide, a reference to what’s good in life. With neither beginning nor end, a place evolves and transcends.
“It’s really cool to see the whole country come together in times like these,” Driscoll said. “It shows how amazing America is. This is our place, our home. When everyone comes together like this, it does a heart good. It’s so good to see. This is what we’re all about.”