Hecker learned the game at the Wee Burn Club in Darien and won consecutive national championships in 1901 and 1902.

CSGA (April 19, 2020) Okay, you’ve had plenty of time these past few weeks to bone up on your golf history, so here goes:

Hint: It was not Gene Sarazen, who did win two U.S. Opens and did publish a book, saying famously when he received the final manuscript from his ghost writer, “I have read my book and I like it very much.” Nor was it Julius Boros, who won the U.S. Open in 1952 and 1963 and wrote several instruction books including Swing Easy, Hit Hard. Strong books, but not necessarily momentous.

It was a woman named Genevieve Hecker. 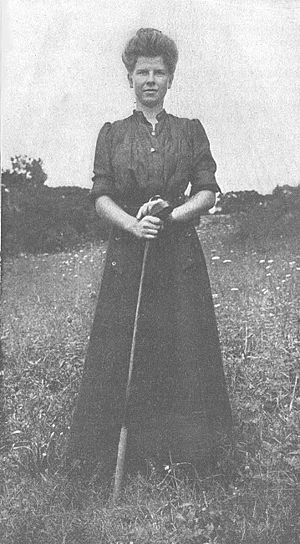 Hecker, a Darien native who learned at the game at the Wee Burn Club, won the Women’s Amateur Championship in 1901 and 1902—there was no U.S. Women’s Open then—and wrote what is considered to be the first golf book aimed exclusively at women, called simply, Golf For Women. Hecker’s two consecutive national championships, when she was 17 and 18, were part of an early dominance by Connecticut female players back then. In 1904 Georgianna Bishop of Brooklawn Country Club won the title, too.

It seems fitting, as we celebrate the overdo announcement this week that the great Marion Hollins will enter the World Golf Hall of Fame, that we revisit Hecker and her ground-breaking work.

In Golf For Women Hecker produced a practical, charming and, at times, feisty introduction to the game, much of its advice still applicable today. As one who often played golf with men, Hecker was not at all patient with their condescension. Her book celebrated the fact that women, both in the UK and in America, had won the freedom to play without, for the most part, restriction by “the Lords of Creation.”

When women in America first began to play golf, they were allowed at many of the big clubs to use the links only at certain hours on certain says when it was thought that their presence would not incommode the Lords of Creation. The idea that a woman could learn to play a really good and serious game of golf was laughed to scorn, and if there were many women who evinced a desire to play at the various clubs, numbers of them would doubtless have followed the example of Shinnecock Hills Club and laid out a course exclusively for women…After much hesitation and head-shaking on the part of those men who, never having had sisters, had no idea of the physical capabilities of a girl, and her ability to do anything she really wanted to, permission was granted….

Noticing that “there never had been a book which presented the Royal and Ancient game to the feminine inquiring mind” Hecker took it on, publishing in 1904. Golf For Women offered straightforward and accessible instruction. Her book represents a snapshot of a sport just coming of age in America. It’s an enjoyable read. After introducing the beginner to the game’s equipment—driver, brassey, cleek, mid-iron, mashie and putter—Hecker urges her readers to start simply, even for those days.

While six clubs are necessary to the expert player, it is a great mistake for a novice to purchase so many to begin with. She should buy a driver and a lot of old balls. Don’t take new ones or you will wound our feelings deeply when your first shots cuts a gash an inch long and a quarter inch deep in the pretty white little globe.

Hecker, who also won four Metropolitan Golf Championships, wisely advises her students to limit their expectations as they start.

“The tortures of Tantalus are as nothing compared to the mortal who has once tasted the joys of a full cleanly hit shot,” writes Hecker. She goes on to advise the novice not only to refrain from playing the course for several weeks  but, above all, to “never think of counting the number of strokes for six months after she begins to play.”

(Tantalus, by the way, was a king in Greek mythology who, after attempting to serve his own son at a feast with the gods, was punished by Zeus to forever go thirsty and hungry.)

Some of Hecker’s advice is not quite so relevant to today’s game.

The question of corsets is one which a woman can decide for herself. In the days of tight-lacing they were out of the question, but now that common-sense governs their use, they play no more important part in the determining good golf than does the weight or color of a player’s skirt.

Hecker, later a member at the Apawamis Club in Rye, N.Y who died in 1960 having married Charles Stout, favored hats, but not gloves. She was rightly skeptical of golf professionals because “pros” back then tended to be simply good players who may or may not have had a talent for teaching.

If you get hold of an instructor who has some idea of telling one how to play, it is best, I think to begin at least under his instruction, but if you find that the ‘pro’ has little or no idea of telling you how to achieve the desired result, or what you are doing wrong, it is better to leave him alone and work out your own salvation.”

And never, she wrote, “make the mistake of taking up a certain stance simply because some celebrated golfer uses it.”

Finally, Hecker warns against the one mistake that she sees as fundamental to female golfers, a shortcoming that today seems to apply to few golfers, male or female.

Perhaps the greatest fault among women golfers is impatience. They are anxious to make their shot that many and many a time they step up to the ball and play it with no more than a casual glance at its lie, the distance to be covered and the nature of the shot which will yield the best results.

Note: Copies of Hecker’s book, reprinted several times and part of at least two “classic” collections, are available on Amazon today. First editions go for almost $1,000, some reproductions for less than $10.