As golf holes go, the par-4 16th at Brooklawn Country Club is a bit of a runt.

It measures only 315 yards and for most of the women playing in the 21st Connecticut Women’s Open, does not even demand a driver. On the card, it pretends to be a breather, especially compared to, say, the 400-yard, creek-crossing 14th a couple holes before.

But Brooklawn members know better. And now the three women who battled to the wire Wednesday for the Open Championship do as well.

In the end, Loretta Giovannettone, the 27-year-old assistant from Woodway Country Cub in Darien, won the championship by a single shot over Brooke Baker, the lanky, long-hitting Symetra Tour player from Florida, and Jordan Lintz, the popular teaching pro from Oronoque Country Club. 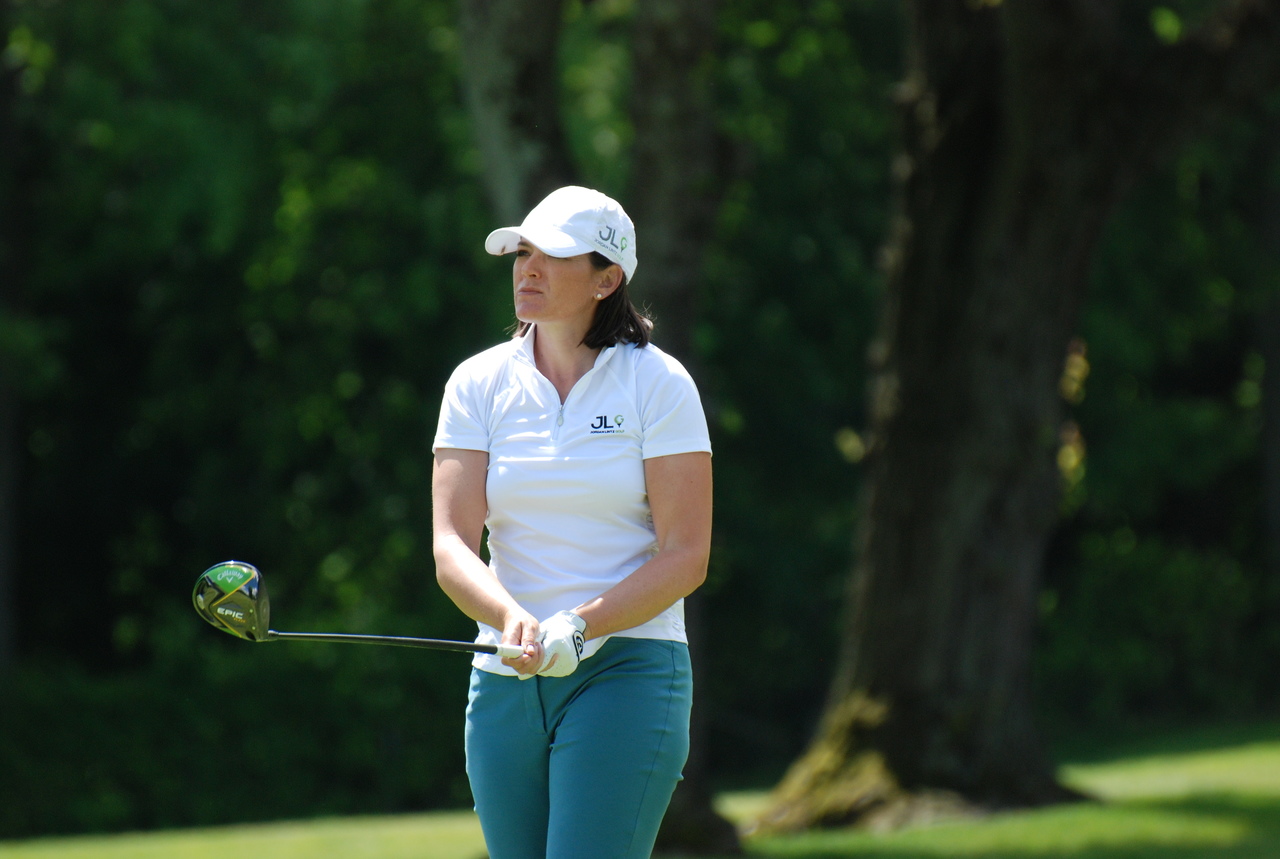 The 16th decided that. Giovannettone mastered it, and most of Brooklawn's greens, better than anyone in the field.

They came to the little 16th within a shot or two of one another. Giovannettone had just birdied the par-3 15th to take over the lead from Baker, who had bogeyed, and extended her lead on Lintz, who had also bogeyed when her solid iron shot, perhaps fueled by adrenalin from her birdie on 14, flew over the flag and over the green. This is how it stood through 15: 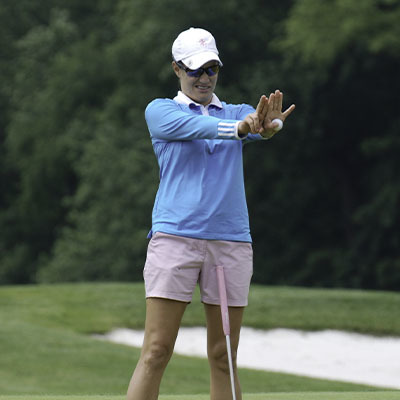 The 16th must have looked like the perfect opportunity for turnaround to Baker (left) when Giovannettone hit her drive into the right rough, facing tree trouble, and Lintz drove into a fairway bunker. Even when Lintz hit it close, and certainly when Giovannettone could only find the fringe, about 30 feet from the hole, Baker was thinking regain the lead.

From the middle of the fairway about 100 yards away, she hit a beautiful wedge directly over the flag that grabbed and began the slow roll down the steeply embanked green toward the flag. Sometimes that roll leaves the ball inches from the hole.  But today Baker’s ball stopped.  Maybe it was the wind. But now she was 20 feet above the hole.

Baker did not make the comeback. Giovannettone, who had hit a nifty putt from the fringe to about 3 feet, made that for par. Lintz missed her short birdie putt and then missed the next one. The ballgame was, almost anyway, over.

With a two-shot cushion now, Giovannettone’s bogey on the 17th didn’t matter. Baker three-putted again, and Lintz had just run out of holes.

“I stood up on 18 and just concentrated on my routine,” said the champion. “Just tried to keep all swing thoughts out of my mind. Kind of funny for an instructor, eh? I hit it as hard as I could.”

To the middle of the fairway, about 120 yards from the green. She hit a short iron hole-high to about 18 feet. Baker hit it closer. But even when Baker’s birdie fell, thanks to a deft lag putt, Giovannettone had just a two-footer for par to take the trophy.

“Brooke got kind of a bad break on 16,” said Giovannettone.   “And at that point the putt becomes kind of circus-like. But we all faced it.” Said Baker: “I’m disappointed, but I’m proud of the way I fought back. After the first hole, which I bogeyed and Loretta eagled, I was three back.  And I turned that around and was there at the end.”

For Giovannettone, the fifth grader who told her teacher she wanted to go to Duke and be an LPGA pro, the competitive dream has been altered, but not deferred. She played golf at Methodist University in Fayatteville, N.C., not too far from Duke.. She became a teaching pro. And this spring she won the Metropolitan Women’s PGA. Today she captured an even bigger prize, the Connecticut Women’s Open. “I’m proud of the way I fought today, and fought back. I’m kind of cloud nine right now but it feels great.”

For Lintz (right), one of the state’s leading instructors, it was a chance to prove to the many members who followed her this week that she’s not an example of, ‘those who can’t do, teach.’

“I take away a lot of positives,” she said. “I really didn’t hit the ball well early. I think I hit four fairways. But I hung in there.  And on the back I began to strike it well.  I think the adrenaline from the birdie on 14 caused that shot I hit on 15 to go so far.” And then there was 16. 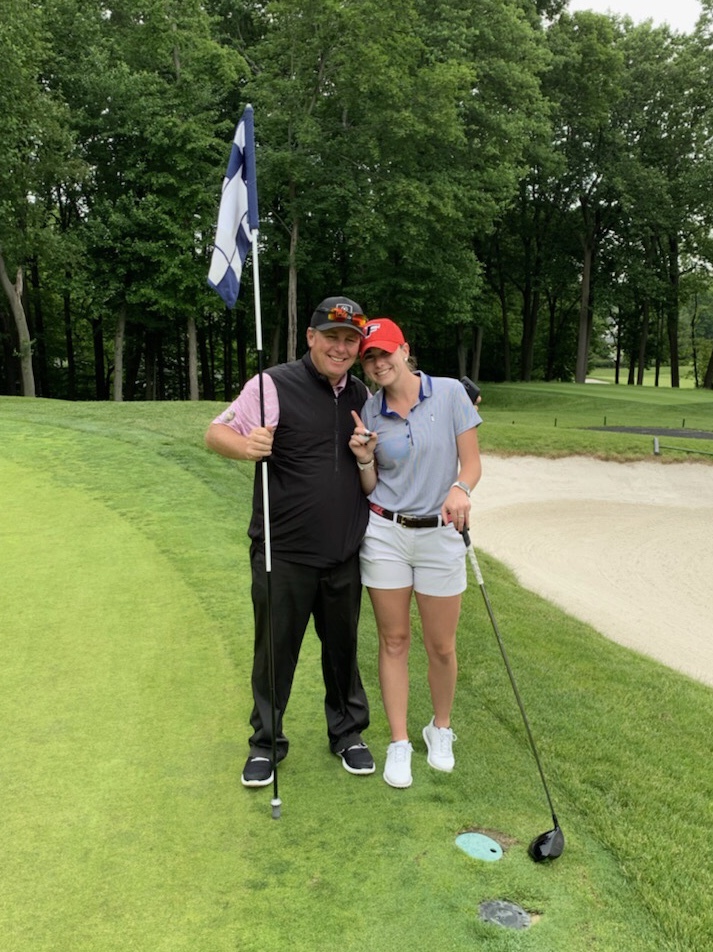 While the leaders battled and slipped at times, one amateur found her groove. Jennifer Keim, a 21-year-old from the Cape, with mother Debbie, a teaching professional, on her bag, shot 67, the best round of the day and of the tournament, to take Low Amateur honors at -1, tied with Lintz for third. Ami Gianchandani of Yale was second low am at even par. Thirteen-year-old amateur Sydney Yermish was plus two, T8.

Yermish tied with 2008 Women's Open champion Lynn Valentine, who was leader among the senior women who played Brooklawn this week as a rehearsal for next year's 3rd U.S. Senior Women's Open. Valentine birdied No. 18 for the second straight day to finish T8. Cindy Figg-Currier, the LPGA winner who will be part of next year's field, was plus five for the two days and T11. Christine Greatrex, director of instruction at Braeburn Country Club, was plus nine and T20. 2009 Connecticut Women's Open Champion, recently back from the 2nd Senior Women's Open, shot 74(+2)  on the second day  to finish T26. Susan Bond Philo from Jacksonville was T31, Michele Murph 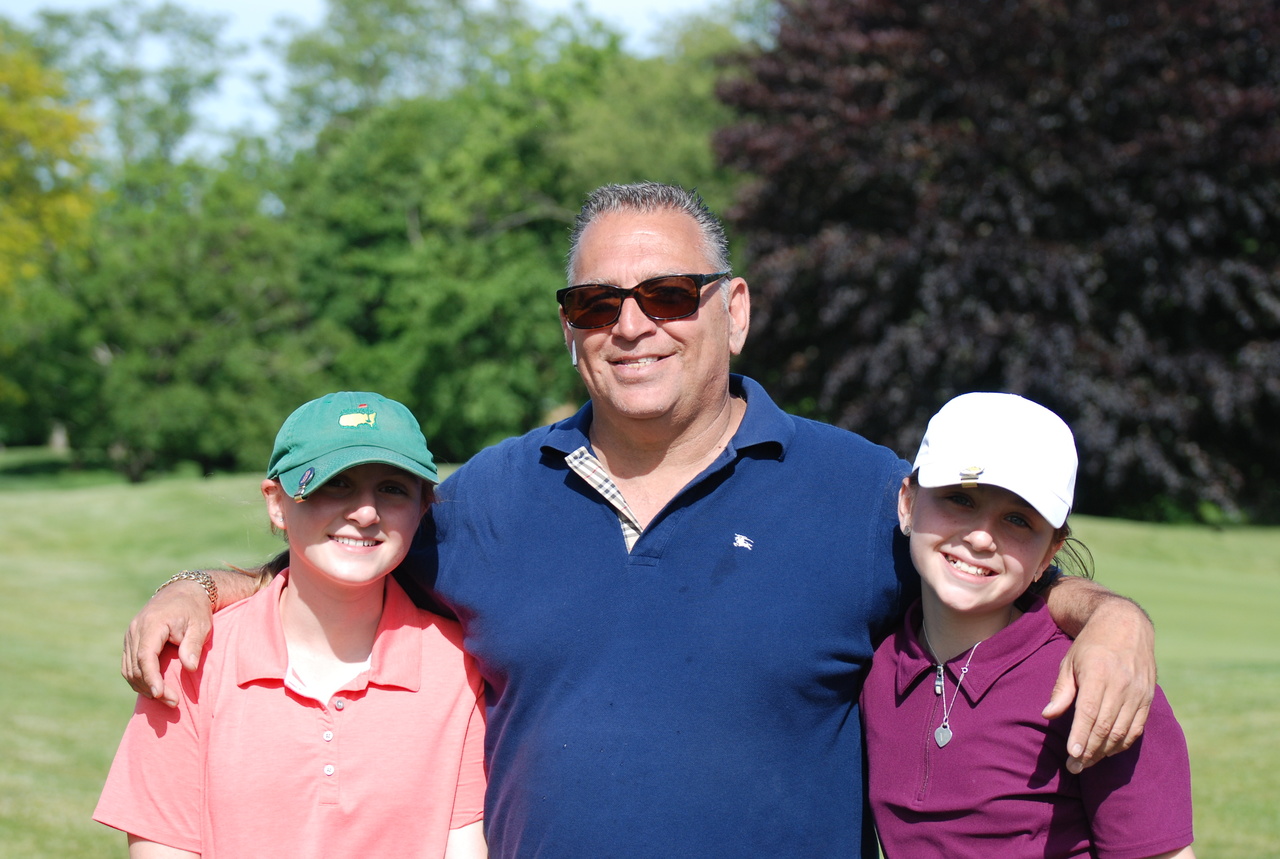 y T33 and former LPGA Tour Player Jeannette Kohlhaas of Virginia was T46. A double and triple in the last five holes undid her. But like most of the competitors, old and young, she was impressed with Brooklawn. "It is a beautiful golf course in perfect condition. But those greens. For sure, they're the defense. So challenging."

One way to solve that challenge is not to have to putt. Alexa Brown of Tashua (left), with head pro dad Bobby Brown on the bag, aced the par-three fifth hole. It was the Fairfield University's rising junior's first hole-in-one.

Finally, an account of the final round of the 2019 Connecticut Women’s Open would not be complete without mentioning that 10-year-old Vincenza “Vinny” Papa who stands slightly taller than her driver and hits the ball at most about 175 yards, shot 75 (+3) Wednesday to finish T20. Her sister Gianna, 13, finished T46. (Photo of Gianna, dad Paul and Vinny, right).  Vinny parred 16.