A Golf Academy Grows in Connecticut

January 12, 2020—On first blush, the idea of putting a golf academy in Connecticut sounds a bit like opening a ski jumping school in Palm Springs.

But almost 15 years after he launched Golf Performance Center in a cramped former office space on Route 7 in Ridgefield, Roger Knick’s dream continues to grow.

Living on the site of the old Belmont driving range since 2010—renovated and sporting an outdoor practice area with fairways as nice as many clubs—it also includes the Ethan Allan Preparatory School down the road at what used to be the Stonehenge Inn.

Knick, a former minor league baseball player (Cleveland Indians) and local teaching professional (Redding Country Club and Sunningdale Country Club in Westchester) thought it was just what parents and golf-obsessed kids in Connecticut needed back in 2000 when he took the leap. He got grief from old patrons of the driving range, but he found plenty of fans, players old and young, who sought the discipline of a “club” devoted not just to playing but to improving in all aspects of the game.

But in Connecticut? Knick saw that as an advantage.

“I came up from Florida to Connecticut 22 years ago and just fell in love with the area. Academically it’s one of the best places in the world. In demographic or socio-economic terms, people can afford [to send their kids to an academy]. I like the change of seasons and the winter time gave us a chance to focus on aspects beyond the swing itself…the mental, physical performance, mechanics…I actually think it’s a huge advantage.”

Apparently, his instincts were right. Today GPC has about 60 kids investing some $15,000 a year to work on all aspects of golf improvement, from physical strength and motion to mental toughness to swing mechanics themselves. (There are also 50 adult using the center for a membership of about $9,000 per year). On any given day they can be seen leaping, swinging, lifting and otherwise testing themselves indoors and out, with another handful enrolled in classes down the street. (He hopes to increase that number to 50-plus in three years). The academy evaluates young players and builds practice plans in a holistic way, combining swing technique with conditioning, mental-side training and nutrition. The idea is to build golfers, yes, but learners, too, who can succeed at anything they take on.

Not surprising then, that the Golf Performance Center isn’t called the Roger Knick Golf Academy. “It’s not about me,” he says. “It’s about the kids.” It’s also not a swing method, he says. He, Director of Instruction Tyler Campbell, head instructor Dennis Hillman,  specialty faculty such as putting coach Bill Smittle, talk often about physical limitations or performance will dictate what swing a student can produce. “Function dictates form” is their mantra. “Let’s see what the body can do and that will determine what form the motion will take.”

Players are tested when they enter the school. Their “Performance Index” is then updated “just like a handicap index,” says Knick. GPC method is infused with advice and guidance from the likes of Anders Ericsson, whose “deliberate practice” was made famous in Malcolm Gladwell’s Outliers, Angela Duckworth, the University of Pennsylvania psychologist who wrote Grit, and Carol Dweck, the author of Mindset. Even mindfulness training is included.

The market was there. “There are a lot of people on the East Coast and in the Northeast who don’t want to send their kids a couple thousand miles away,” says Tad Wampfler a client of the Academy who became its COO. “They want to be able to see them.”

Steve Han, father of highly ranked junior Nathan Han, who has attended the Center, agrees. “As a businessman, Roger is a visionary. He has built what has to be the leading academy in New England.” Although Knick says the idea is not necessarily to attract the top junior golfers but rather to develop them, he’s had some good ones. Nathan, who won the 2018 World Junior Challenge title and now plays for Columbia, is one. Andrew Sciarretta, the 2015 Connecticut Junior Champion and now University of Richmond star is another. And so are the VanDerLaan boys, John and Michael, both of whom won the NCAA Division II National Championship. GPC now sponsors John VanDerLaan, who recently qualified for the Korn Ferry Tour, one step from the PGA Tour.

VanDerLaan started before high school. “My Dad found it,” says John. “I don’t know how, but he said ‘This is the best place in the Northeast, and this is what you need.’ I think the program then was three days, but I came every day.”

VanDerLaan visited the center over the holidays after his successful Korn Ferry qualifying. “What I like about it is that it’s about do, not try,” says VanDerLaan’s mother, Maria, a medical-field attorney. “In our family, it’s never try. It’s not ‘kids were mean to me’ or ‘it’s hard,’ any of that. If you say you’re going to do something, you do it. That’s it.”

When the VanDerLaan boys said they were serious about golf, their parents agreed to foot the rather pricey bill, but handed the kids  a “contract.” “We put it on the refrigerator. We’re going to do this. You’re going to do that. I had friends who said to me at parties ‘Are you crazy? Spending all this money for your kid’s pipe dream?’ It got to the point where I just wanted to put my hands over my ears and go la la la la.”

“Can you see where I got my mindset?” laughed John, 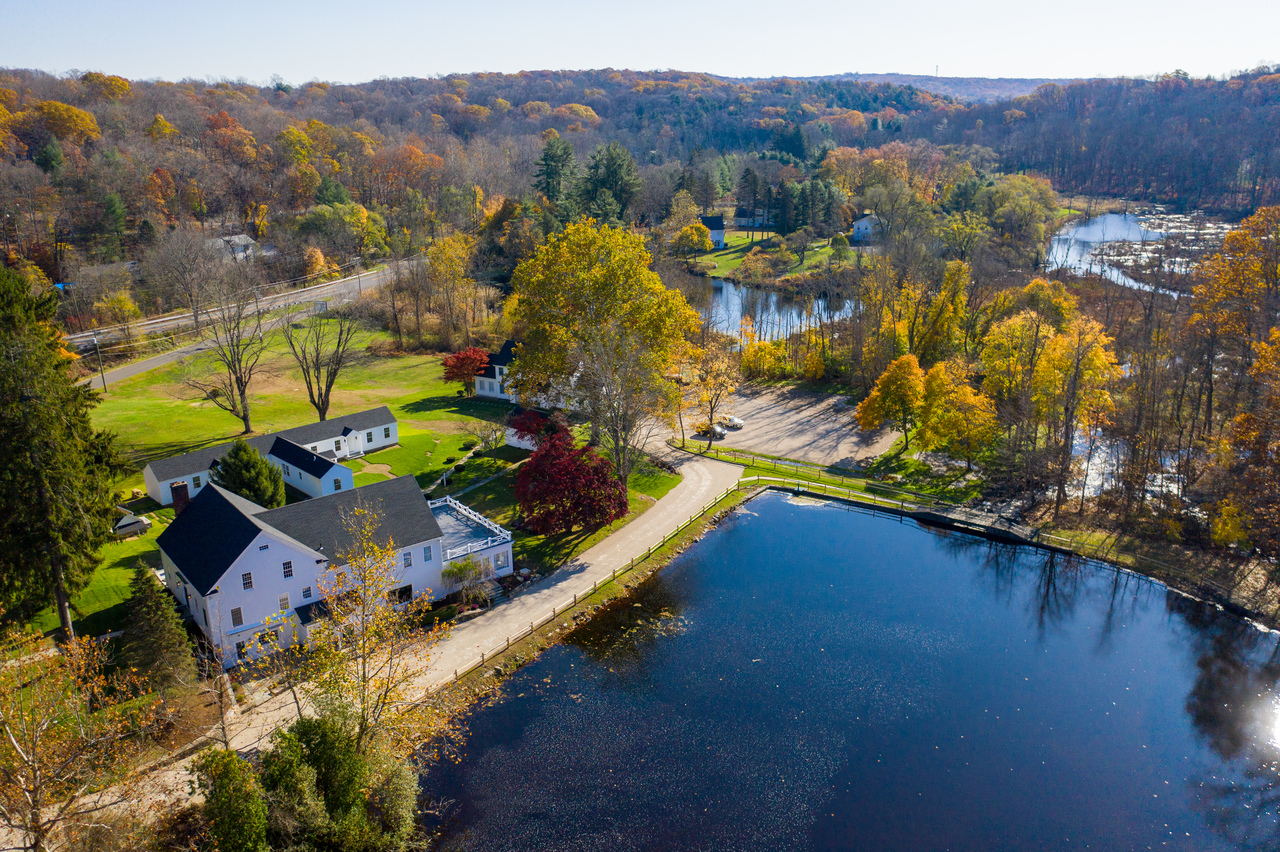 John and Michael did not attend Ethan Allen Prep (left), but Michael Donnelly, the son of Michael and Nuala was one of the first students to do both golf training and school. “It was just getting off the ground and we said we don’t want to make you a guinea pig,’” recalls Nuala.  “And he said, ‘I’m making myself a guinea pig, I want to do this!’”

The Donnelly’s, from Westchester, checked out the K12 International Academy program with local school officials. “We went to guidance counselor and the assistant superintendent of schools and said ‘What do you think? ' They said, 'This is where education is going. And this is a really good program.’ We were kinda surprised.” (Tuition at Ethan Allen Prep includes golf center instruction, with total fees typical of New England boarding schools). Son Michael will study environmental science and play golf at Roanoke University next fall. They also used a recent offshoot of the Golf Performance Center, Junior Golf Hub, with 6000 online members who get advice and placement help for kids wanting to develop their games and play in college. Personal profiles make it easy for college coaches to evaluate the JGH members. Rick Dowling, the two-time Connecticut Amateur Champion and 2019 Player of the Year, plays a key rolle at Junior Golf Hub.

“What I liked is that they didn’t blow smoke,” says Nuala, a former currency trader and now wellness center manager. “We said, ‘Be honest about how Michael’s doing. Tell us what’s what.’ And they were, brutally honest. But really supportive and nurturing.”

There are some parents who think a “name” instructor might attract more of the elite junior players in the area, but Knick doesn’t seem worried about it. “I know there are academies that give scholarships to the top players so that they can promote that way. We don’t. I’m not seeking the best kids coming in. I want the best kids going out.”

A few parents have also argued for more personalization in the program, and Knick, who rails against cookie-cutter instruction himself, acknowledges that he sometimes has “healthy debates” with parents about sticking to the development program while coordinating with outside swing coaches. “It’s not a one-way street.” he says. Steve Han thinks a bit more customization would help. “It’s really important that a kid owns his own swing,” says Han. ”So the instruction has to be customized. Drills can’t be the same for everyone.”

Overall, however, reviews are positive, and Knick is adding talent. A top priority is to hire a female coach who can teach and travel with players. It hopes to fill Ethan Allen Prep with 50-plus students by 2023.

The Center’s elite Achieve Level students travel a week out of every winter month to Florida to practice and compete, and Knick seeks to create permanent GPC home there as well.

For now, however, the idea of putting a golf center and academy in Connecticut seems to be working out just fine.