Tiger Woods was on hand to congratulate Joe LaCava on his induction. (Photo: Western Golf Association)

Joe LaCava has had a darned good season.

In April LaCava, of Newtown, helped Tiger Woods win his 15th major at the Masters, an amazing 27 years after he did the same for Fred Couples. 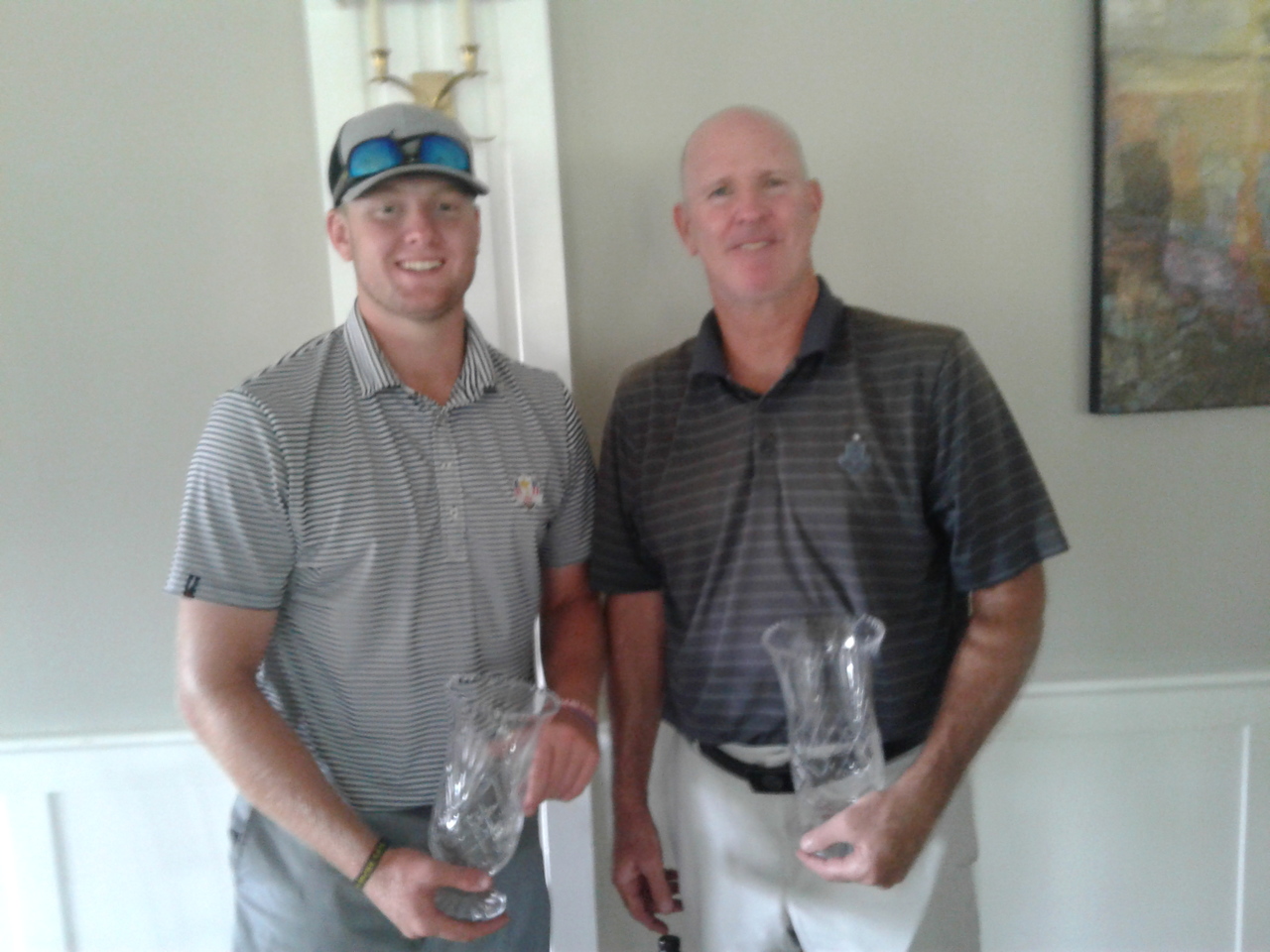 In July, back in Connecticut, Joe, a 7 handicap, won the CSGA’s Father Son Net Tournament with his son Joseph (photo) at Redding Country Club (the “trophy” here being the knowledge that his son is really getting into golf).

And last week in Chicago LaCava was inducted into the Caddie Hall of Fame at the BMW Championship, joining a group that includes the late Bruce Edwards, also of Connecticut, “Fluff Cowan,” Jim “Bones” Mackay, Angelo Argea, the Murray brothers and Jack Nicklaus.

“I’m overwhelmed,” LaCava said. “I love caddying because I’m just competitive and I hate losing. That’s what it’s about for me. I’m all about winning and having my guy win.”

LaCava began his career in 1987 caddying for his cousin Ken Green of Danbury before Fred Couples hired him in 1990. With LaCava on the bag, Couples won 12 times on the PGA Tour, including that 1992 Masters victory and the 1996 Players Championship. “For more than 30 years, Joe has personified professionalism and elevated the profile of caddies worldwide,” said Vince Pellegrino, Senior Vice President of Tournaments for the Western Golf Association, which conducts the BMW Championship.

LaCava, 55, has also worked for Davis Love III, Justin Leonard and Dustin Johnson before joining with Woods and becoming one of the most recognized caddies in the game.

Joe is a man’s man and a caddie’s caddie, players and caddies alike will tell you.

He is credited with sticking with Tiger when many in the golf world had written the star off, a faith that had much to do with Tiger’s 15th major win this April. For LaCava, it wasn’t a tough call. “If I could live another hundred years I’d wait another hundred years,” LaCava told the Caddie Network. “I was never not going to work for Tiger as long as he was going to have me. I just wanted to work for him and no one else. And I think that helped a little bit, knowing that he had a friend that thought that much of him, as a person and with his game.”

LaCava was inducted into the Hall of Fame following the BMW Championship’s Gardner Heidrick Pro-Am at Medinah Country Club.  Administered by the Western Golf Association since 2011, the Caddie Hall of Fame highlights the tradition and importance of caddying by recognizing individuals who have devoted their lives to the game of golf through caddying or by supporting the role of caddies. Past inductees also include Charles “Chick” Evans, Steve Williams and Tom Watson. The Western Golf Association also administers the Evans Scholarship, which provides full, four-year scholarships to universities across the country to about 250 caddies every year.

Tiger was there for LaCava’s induction, laughing as Joe described his response in 2011 when Tiger asked him if he’d be “interested” in caddying for him. “F——- yeah!” was LaCava’s reply, he told the crowd. At the time LaCava was caddying for a mostly unknown player named Dustin Johnson.

Joe will be there, you can be sure, for Tiger’s next win, too, major or not. And he’ll never forget the message he got from Tiger after the last one. “He said, ‘We did it, appreciate you hanging in there with me, I love you like a brother,” LaCava told Golf Digest. “And I sent one back very similar to that.” That day Joe got another text from the player he helped win at Augusta almost three decades before. “I’m just so excited for you,’” Fred Couples wrote. “If not more excited than when I won in ’92.’ That’s just who  he is,” said LaCava.

And that’s who Joe LaCava is. A partner who tends to bring out the best in the people he works for.