(January 23, 2021) - Joe Morelli of Hearst Connecticut Media has been a staple of the Connecticut sports reporting scene since the early 1990's, and a fixture at Connecticut State Golf Association events since 1998. If there is a state championship or a major Connecticut golf tournament on the line Morelli will be there, poised to recount all the events of the day.

A sports journalist is accustom to being behind the scences, watching, gathering the facts, and reporting. They are not accustomed to being in the limelight, accepting the praise that is usually resereved for the athletes they cover. For Morelli, that changed on New Year's Day 2021 when he receieved a phone call congratulating him on being named the 2020 Connecticut Sportswriter of the Year by the National Sports Media Association. Morelli joins a group of scribes that dates back to 1959 and includes Dom Amore, Jeff Jacobs, Adrian Wojnarowski, Owen Canfield, among many others.

"It is a great honor because it is from your peers in that organization. Someone had to nominate me," says Morelli. "I had to sit on it for a week, but once people found out and started to congratulate me it started to sink in, it is a real honor to be respected by your peers. To hear from people that you haven't heard from in years. The truth of the matter is, you never know who is paying attention and when you write something, you never know who it is going to reach, and to have a positive impact is an honor."

Morelli got his start in media in 1987 with the Stratford Star, while still a student at Stratford High School. After graduating high school in 1989 he attended the University of Connecticut writing for the student newspaper, the Daily Campus. As a senior at UConn Morelli served as the paper's sports editor. Following college Morelli got his professional start at the Milford Citizen, before moving to the Elms City Newspaper where he was the sports editor for six weekly newspapers. During that time period he also freelanced for the Waterbury-Republican American. In 1997 Morelli was hired byNew Haven Register and he has been writing for the publication, now part of Hearst Connecticut Media, ever since. 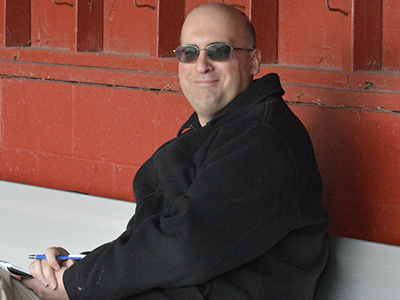 As to how his career in sports journalism began Morelli says, "I wasn't good enough to play sports although I did play golf in high school. But I wanted to stay close to the game. I started right at the tail end of the typewriter era. I still get as much enjoyment out of the games themselves as I did when I first started."

In 1998 Morelli began covering the state golf scene. That year he covered Liz Janangelo Caron's win at the Connecticut Women's Amateur and J.J. Henry's victory at the New England Amateur. "When Henry won the New England Amateur at New Haven Country Club, someone else couldn't do it. So I was asked [if I could cover it] and I said yes."

His work covering golf in 1998 eventually sprung board Morelli into the role of lead golf reporter for the New Haven Register in 2001, a role that he has contiuned with Hearst Connecticut Media. Along with his reporting from CSGA events, Morelli is a fixture each year at the Travelers Championship, and in 2004 he reported from the Masters, US Open, and US Amateur. "I have enjoyed covering the CSGA for [more than] two decades and I will continue to do it as long as I can. I like all aspects of covering golf. I like being there for the big events," says Morelli. "I enjoy just talking about the game itself. The game is about integrity and honesty, it is just different."

Ten-years after Morelli covered his first Connecticut golf events, former CSGA president Bruce Guthrie invited Morelli to join the Connecticut Golf Hall of Fame Committee. Similar to when Morelli jumped at the chance to cover the 1998 New England Amateur, Morelli took the opportinuty and ran with it. As a member of the committee he attends meetings, reviews the voter material, receommends individuals for induction, and votes on nominations.

"Joe brings great knowledge and commitment to the Hall of Fame Committee," says CSGA Executive Director, Mike Moraghan, "just as he does every day as a sportswriter. His has all the right attributes. He appreciates the highs and lows that athletes experience. He works long hours and he is respectful of everyone. He's just a real good guy. You would be hard pressed to find a more likable person than Joe Morelli."

As honored as Morelli is by the award, it is clear he is excited to get back to work. Morelli primarily covers high school sports and with the recent announcement by the CIAC that winter sports can begin in early Febuary he is ready to return to the games that he loves so much.

"There are a lot of people who have helped me along the way to get me where I am," says Morelli, who lives in Branford with his wife Megan and five-year-old son Patrick. "Too many to mention. They know who they are, and I am deeply indebted to all of them. There are just so many of them. I want to say thank you to everyone who has helped me get to this point in my career."