CSGA—(February 24)—For three caddies from Connecticut, looping turned out to be much more than a source of summer cash. The three have been awarded the prestigious Chick Evans Scholarship.

Graduating high school seniors Alex Lipari of New Milford, a caddie at Winged Foot, and Alejandro Vasquez of Norwalk, who caddies at Sankaty Head Golf Club in Nantucket, have won full rides to Purdue and Penn State respectively. Mark Dellostritto of Cheshire (photo), son of PGA professional Ron Dellostritto, and a Widdy Neale Scholar who caddies at New Haven Country Club, will receive the scholarship as a sophomore. He just completed his first year in Liberal Arts at Vanderbilt University. 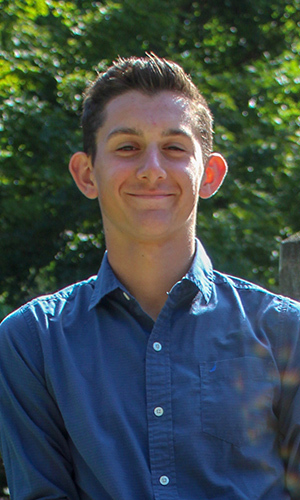 According to the Evans Scholarship Foundation, administered by the Western Golf Association, this brings to more than twenty the number of Connecticut caddies who have earned the scholarship, named after the late Chicago amateur, Chick Evans. After winning both the U.S. Amateur and U.S. Open Championship in 1916, and subsequently earning money from a golf book, Evans chose to remain an amateur and took his mother’s suggestion to devote his earnings to a scholarship for caddies. The annual BMW Championship and thousands of donors, many of them former caddies, contribute to the Evans’ nearly $20 million a year tuition bill.

There are now 1,010 Evans Scholars enrolled in 18 leading universities across the country, including the schools of the Big Ten and other universities such as Colorado, Notre Dame and Miami of Ohio. Since the scholarship’s birth in 1930, more than 11,000 have graduated from the program.

The Evans, which is a full, four-year scholarship provides both tuition and Evans Scholars chapter housing. It is caddies-only, and in addition to high academic achievement, applicants must have caddied at least 100 rounds in addition to financial need.

The three Connecticut winners came to their jobs on different paths.

Lipari got started in caddying at the suggestion of Winged Foot’s caddie master, David Zona, who attends the same church as the Lipari family in New Milford. Lipari won the Westchester Evans Scholarship, awarded in conjunction with the Westchester Golf Association Caddie Foundation. “This would be an amazing thing,” Lipari told the WGA selection committee at the Union League Club in February. “I would not be able to attend the kind of [engineering] school I had hoped to attend without it.”

Vasquez took advantage of the Sankaty Head Caddie Camp, which trains, houses and employs caddies during the summer. Sankaty is one of an increasing number of caddie camps and academies around the country at a time when club caddie programs have declined.

“I went from never having been on a golf course to playing golf year-round. Realizing that I was one of the few that had no experience with golf, I spent every moment asking questions and trying my best to learn on the course,” says Vasquez, who logged more than 200 rounds over three years at Sankaty.

For Dellostritto, whose father was until recently the longtime head professional at Wethersfield Country Club, it was always a part of the golf life he knew, but he came to it only a couple of years ago.

All of the three recipients said caddying changed their outlooks on life. “Learning the importance of resilience when faced with the unknown was the big take-away (from caddying),” said Vasquez. Lipari pointed to the job’s opportunity to interact with and learn from the adults he met. “(As a caddie) I have honed my skills, networking and communicating with successful adults and have learned many valuable life lessons along the way.”  Dellostritto said it was love at first loop. “After completing my first few loops, I knew that caddying was for me. Getting to spend a few hours on a course performing a rewarding service for members and guests, while interacting with them and building meaningful connections, didn’t really feel like work.”

Each of the three met the Evans standards of high academic record, community service—all participated in two or three school and community charitable clubs—and at least 100 caddie rounds, in addition to financial need.

Evans Scholars far exceed both average graduation rates and GPAs of the colleges they attend. Across all chapters, Evans Scholars maintained a 3.3 GPA last year.

Well known in the Midwest, where caddie programs continue to flourish, the Evans has in the last five years made efforts to promote the scholarship in the East. In 2019 it opened the first scholarship house at Penn State. This year caddies from Connecticut, New York, Massachusetts, Virginia and New Jersey will receive the scholarship.

For information on the Evans Scholarship