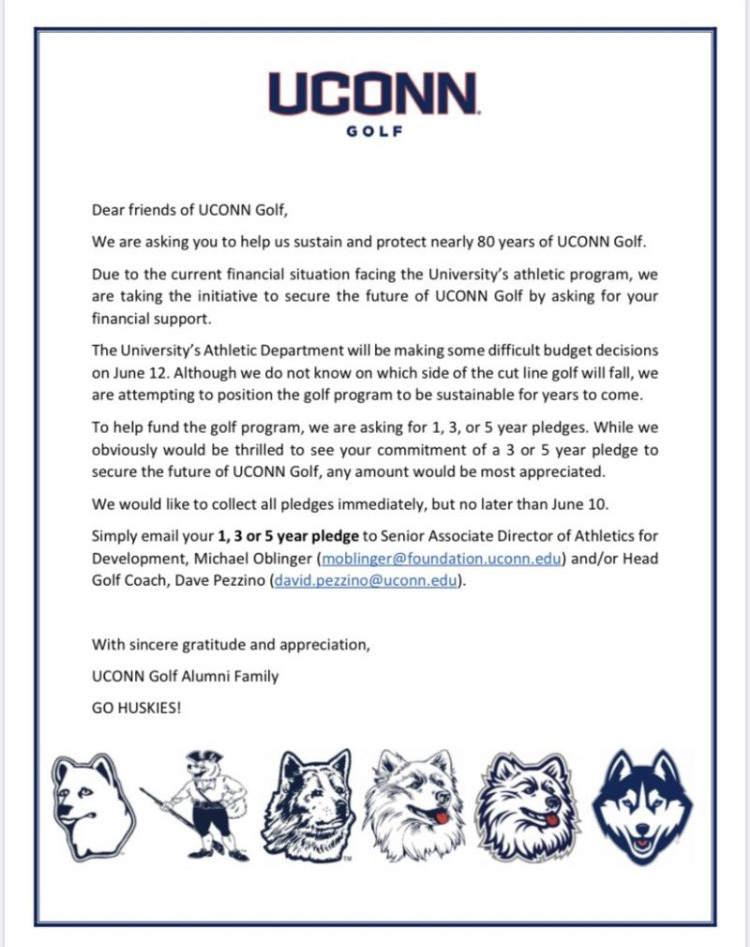 CSGA (June 7, 2020) Alumni of the University of Connecticut golf program, faced with the possibility of UConn dropping the program due to budget cuts, have launched a fundraising drive to support its continuing existence. The drive, only a few weeks old, has produced incredible results. Alums involved in the funraiser tol Connecticut News 8 that it had generated pledges of $500,000.

With an Athletic Department announcement due on June 12, UConn alumni, in a letter to “friends of UConn golf” broadcast on social media, asked for financial contributions:

“We are asking you to sustain and protect nearly 80 years of UConn Golf. Due to the current financial situation facing the University’s athletic program, we are taking the initiative to secure the future of UCONN Golf by asking for your financial support."

The group is seeking pledges of one, three and five years but are happy to take any contribution.

“We would like to collect the pledges immediately,” read the letter, “but no later than June 10.”

The letter asked alumni and supporters of the program to email pledges to Senior Associate Director of Athletics for Development Michael Oblinger or to Golf Coach Dave Pezzino.

“The fundraising started when the news broke about the deficit facing the UConn Athletic program,” said Zach Zaback, who starred at UConn, won two state amateurs and is now competing on the Korn Ferry Tour. “This got the ball rolling across the entire UConn Golf community to make sure it does not affect the future of the program.”

While UConn’s Athletic Department shortfalls predate the COVID-19 pandemic, the recent economic devastation caused by the crisis has led college athletic departments around the country to drop sports programs, golf often among them. UConn's athletic department has a shortfall of more than $40 million in 2019 and is expected to cut at least $10 million from its budget. “We support the administration, " former UConn golfer John Bierkan said. "It’s tough times. I mean, it’s not an easy job dealing with budget cuts and everything going on in the world. We get it, we want to part of the solution."

UConn is not alone. Brown University recently cut 11 sports, including golf to bring its budget into line. The University of Akron’s program as also among almost 100 programs, according to the Associated Press, that have been cut during the crisis. Akron’s Athletic Director, Larry Williams was ordered to chop 23%, or $4.4 million, from his budget. The school dropped men’s cross country, golf and women’s tennis two weeks ago. Furman University announced that they are dropping baseball and men’s lacrosse. Old Dominion has dropped wrestling.

The cuts have drawn criticism, as well as concern that Olympic sports are often among those programs cut.

“College presidents are just not thinking this through,” former University of Idaho president Chuck Staben told the Los Angeles Times. “I cannot believe they are making all these probably bad financial decisions for their university when what we need them to do in the face of this pandemic and pending budget cuts from tuition shortfalls and state funding shortfalls is to make good financial decisions that benefit students.”

Golf programs in Connecticut have been vulnerable before the crisis as well. In 2018 Central Connecticut State University dropped both its men’s and women’s golf programs, along with numerous athletic scholarships. Then CCSU Coach Kyle Gallo called the decision “heartbreaking.”

UConn’s program has produced particularly strong players and been a huge presence in the Connecticut golf scene. Besides Zaback, Cheshire’s Eric Dietrich, who qualified for the U.S. Open last year at Pebble Beach, and competes on the Mackenzie—PGA Tour Canada, is a graduate. In last year’s Connecticut Amateur Championship at Fox Hopyard Golf Club, two current UConn players, Chandler Morris and Finn Boynton, met in the semi-finals. Morris, who contended in the Palmer Cup earlier in the year, beat Boynton but fell to Rick Dowling on the final hole of the championship.

The Huskies are coming off of a season that included a tournament championship, and six top-five finishes. Captain Jimmy Hervol advanced to the NCAA Regionals. And for the 15th straight time under Pezzino, the team was honored for academic achievement in the top ten percent of the country.

For Zabach, supporting the program during the crisis is personal. “The UConn golf team gave me the opportunity to develop the skills that I needed to pursue a career in professional golf. It would be very unfortunate if that opportunity were stripped away for up and coming golfers,” he said. “This community has taught me the importance of being a part of something bigger than yourself.”

Zabach says response to the drive has only reinforced that feeling. “It has been amazing to see the effort that is being put forth. Being in touch with other alumni and members of the UCONN golf community has made me realize how much people care about the program. You can see the impact it has had on peoples’ lives.”

And will continue to, if Zabach and other alums succeed with their drive.

Our Sam Dostaler interviewed Coach Pezzino prior to this latest news as part of our 15 Minutes With  series. series. Click to hear it.